Slovakia's biggest international theatre festival, Divadelná Nitra, is celebrating its 25th anniversary. This year, the festival showcases top Slovak actors, the best Czech production of the year, an Oscar-awarded Hungarian film, exceptional Polish underground, and an internationally appraised Ukrainian political cabaret. The anniversary edition, held on 23-28 September, promises "the hottest themes of [Slovakia's] neighbours presented by famous personalities of theatre, art or film", to be "reflected by young critics from both Central and Eastern Europe." The theme of the Festival is Ode to Joy? (past – present – future).

There will be of course no shortage of domestic works which will reflect the contemporary Slovak society. Theatre Astorka Korzo ´90 will bring to Nitra the work by Michal Vajdička Empty Hole. Zuzana Kronerová, Anna Šišková, Ady Hajdu and others will be, among other things, asking onstage: “Slovakia... What kind of country is it? What is a typical Slovak male and female like? Is it safe here? How is life in Slovakia?”

A director, author, actor and performer all at once, Sláva Daubnerová, will bring her Solo Lamentoso, based on the real story of a woman who had been terrorizing her neighbours with loud playing of an opera aria for years, showing the various ways how extremism can be born.

The Andrej Bagar Theatre in Nitra will perform the play Hamlet Is Dead – Faust Is Hungry, showing the actual theme: the distanced life of contemporary people in their thirties.

The Slovak Chamber Theatre from Martin will bring at the Festival the dramatization of the autobiographical novel by Žo Langerová Back Then in Bratislava, which has become in 2007 the Book of the Year.

The choreographer Petra Fornayová will show at the Festival the dance performance Opernball in which she will connect dance, music, video-art and contemporary Slovak poetry.

From the neighbouring Czech Republic, the best Czech production of the year 2015 – The Hearing from the Chamber Stage Arena in Ostrava will come to Nitra. On stage, there will be a meeting of Nazi criminal Adolf Eichmann in a fictional confessing of his sins, a Jewish war hero, a plain woman as a representative of nation able to survive in any regime, but also Vojtech Tuka or Alexander Mach from the radical part of Hlinka´s Slovak People´s Party who directed the deportation of Slovak Jews to the concentration camps in Poland.

Young Polish theatre artists will bring a video-installation called Kantor Downtown from Teatr Polski Bydgoszcz. After a hundred years from the birth of one of the most important creators of Eastern-European avant-garde Tadeusz Kantor, they will present a bitter-funny probe into the lives and dreams of some of the stars of the American underground culture from the seventies and eighties.

To the collection of theatre testimonies from our region will be added also six female musicians and singers from Ukrainian Dakh Daughters Band, which have become, after their performance on the Kiev’s square Majdan during the revolution, one of the symbols of resistance against suppressing democracy. Their cabaret performance Roses is connected with the occupied town of Doneck which is called today "the city of a million roses".

Scroll down to the bottom of the page for the full press release. 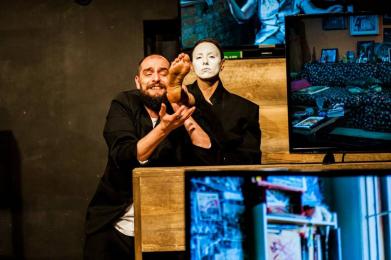 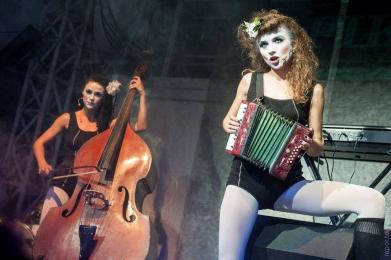