Its buildings, its streets, its squares and its people star on it...

And the public space, a boring everyday scenery until now, reveals itself as the ideal ground for the artists to express the contemporary artistic creation, to unfold the ideas and images of contemporary dance, to exchange knowledge, inspiration and visions, to colour and emphasize the liveliness of the city.

The artists of an urban dance festival can change the entire image of the city, without ever interfering in it!

That is because they think of it as a stage on which they can express themselves in the language of dance.

From this angle, the city transforms into a platform for communicating ideas, into a fountain of creative stimulations, a meeting point and common frame of reference for dancers and spectators.

That is why the festival takes place everywhere in the city. In its squares and streets, in familiar public buildings...

The urban landscape thus embodies both dancers and spectators: anyone present in the city of Corfu during the festival can watch the events – and maybe even participate in them...

More details and info on how to apply to participate in the workshops here. 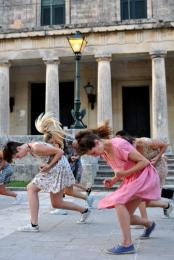