A one week workshop at Odin Teatret led by Giuseppe L. Bonifati of DOO (Divano Occidentale Orientale) to make urban actions and prepare a group performance with 20 participants (artists and not) in Holstebro.

10 - 17 AUGUST (including arrival and departure)

Despite the many humanitarian battles of nowadays, we have good reason to say that we do not care about each other. No matter the faces, the scars, the form of the eyes, we don’t want to show ourselves as we really are. We prefer a secure connection, overprotected, the one that we adopt every day, a bit like this: “https://” (Secure Hypertext Transfer Protocol) we may name it wishing for anonymity?
If a group of people, without knowing, meets en plen air with a bilayer above the skin,
what would the self-righteous say? Would they join the assemblage?
Perhaps.
We need volunteers, person-objects of Anonymity.
It’s like a multicoloured dump, but the Artist this time is not in it.
What happens if He’s the only one not having fun?

More and more often we see urban performances or artistic acts that alter the daily life of everyday citizens; in which the Artist meets the mass and at the same time is in conflict with it. In these actions, the Artist places himself on the opposite side as an orchestral conductor, necessary, but invisible. Instead in this performance, the Artist will reveal himself just in the exact time, as the sound of a gong, giving the start to a multicoloured marathon. In an “exact time” that the ancient Greeks call “Kairos”.
Above the Skin is an artistic and urban action that move from this need:
to meet up, naked and covered (to say it with an oxymoron) by a second skin.

The project aims, through a one-week workshop, to prepare a group performance with local participants (artists and not).  Before the conclusive performance, the group will make different urban actions, walking through the streets of the City, calling the attention of passengers and tourists, interfering with the daily routine.The participants of the workshop could be young people, adults, students, locals or foreigners; regardless of race, religion, sex.
Those who have never been on a stage are really welcome: this time the stage will be the street!

concept and performance by
Giuseppe L. Bonifati
with the partecipation of artists and local people 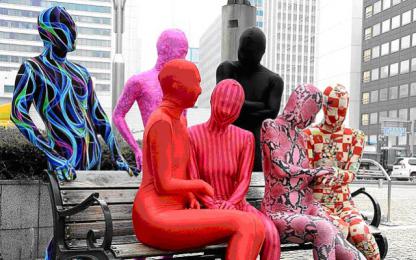