Responsibilities: participating in the Festival activities; contributing to the critical coverage of the Festival events (reviews, interviews); submitting a written critical review of the Festival after the residency/internship is completed
Eligibility: proficiency in English or/and Polish is required.

This year's festival themes are:

1. The political dimension of art. Also of the censored one. We will present distinctly political, critical artists that force to think and open new contexts but at the same time we will reveal the social and economic context of their work.

2. Performing arts. For yet another time we will invite Lublin’s audience to performances that broaden the theatre formula in a fascinating, surprising way, offer a new way of thinking about theatre language, thus questioning the model of dramatic, repertoir theatre as the only one possible.

3. Independence. Theatre Confrontations were founded 20 years ago as a festival of independent, avant-garde, searching theatre. What is independence today? Independence from what, whom? An alternative to what we want to create today?

More information on the festival here. 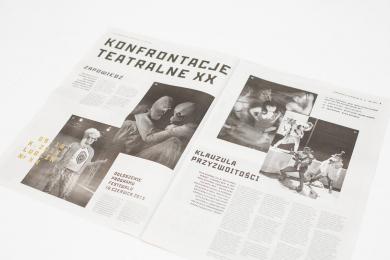