Visual artists from the former Eastern Bloc: Call for submissions to Faces of Freedom

Divadelná Nitra is trying to find

The 28th edition of the International Theatre Festival Divadelná Nitra which will be held in Nitra, Slovakia between 27 September and 2nd October has revealed its main theme.
The structure of the dramaturgy, accompanying programme, and the main topic is: The Faces of Freedom.

In November of this year, we will commemorate the 30th anniversary of the fall of the Iron Curtain (known as the Velvet Revolution in the former Czechoslovakia), whose primary contribution to society is freedom.

Freedom comes in various forms: freedom of the individual, society, speech, thought, religion, sexual orientation, movement, art, etc. How can we define, grasp, understand it? How do people from different countries perceive it?
What does it mean to us? Do we need to fight for it? And how, by which means? What do we do when it is exploited? Where does the freedom of speech end in a world full of conspiracies, hoaxes and fake news?

On this occasion, Nitra Gallery in cooperation with the Divadelná Nitra Association will host an international exhibition of contemporary visual art which will be a significant part of the accompanying programme.

The project’s objective is to showcase how contemporary artists reflect upon the theme of freedom, or the lack of it. Freedom comes in various forms: freedom of the individual, society, speech, thought, religion, sexual orientation, movement, art, etc. How can we define, grasp, understand it? How do people from different countries perceive it? What does it mean to us? Do we need to fight for it? And how, by which means? What do we do when it is exploited? Where does the freedom of speech end in a world full of conspiracies, hoaxes and fake news? Today, freedom sometimes seems to resemble a jungle fight for survival rather than idealistic notions of peaceful and prosperous cohabitation, which can lead to nostalgic memories of the totalitarian golden cage in many of the post-socialist countries. What are the dangers of forgetting our past and the resulting relativism of undemocratic regimes?

Artworks which will be presented at the exhibition The Faces of Freedom will be selected from an international open call which accepts submissions from visual artists of the former Eastern Bloc, which was subjected to the Soviet Union in the period from the end of WWII until 1989. These countries and their people share similar experiences: the long-ruling authoritarian regime, the euphoric arrival of freedom in 1989 and the subsequent transformation period of the 1990s when many considered freedom superior to any and all laws…

There is no specification for the type, technique or format of the submitted artworks, allowing also for happenings and performances. The project allows for free content, but it should respond to the theme of the exhibition and the festival. Both new and existing artworks are eligible as long as they deal with the topic of freedom and/or react to the specific time and space they will be presented in. All submissions will be reviewed by Nitra Gallery’s curator Omar Mirza who will cooperate with representatives of the ITF DN – festival director Darina Kárová and Ján Šimko, curator of foreign productions included in the main programme. The selected artworks will be presented in the space of an art museum, but may also be displayed in various public spaces instead – depending on the nature of the works. In this way we want to bring contemporary visual arts closer to people who do not visit galleries and at the same time connect the theatre and art audiences. As the exhibition is a central part of the ITF DN 2019 accompanying program, some of the performances and public space projects will be presented only during the course of the festival, between September, 27th and October, 9th 2019 when Nitra accommodates a large number of both domestic and international festival attendees. However, most of the artworks will be presented during the whole course of the exhibition.

Due to a limited budget, we will give preference to artworks with less demanding spatial, technical, production and transportation demands. The freedom and power of art is namely not rooted in its size, effect and cost, but in its depth…

It is possible to sumbit several works by one artist.

The deadline for submissions is 30 April.

More details and info on how to submit your artwork here. 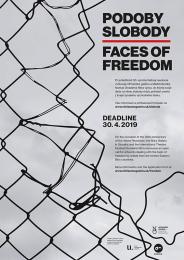