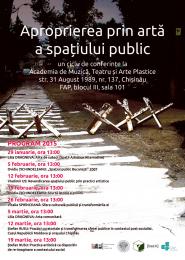 The project includes a pilot/formation course that would anticipate and prepare the ground for launching in the future a master program focused on the theoretical and critical processes in contemporary art, as well as on curatorial practices. We intend to organize a cycle of lessons for students and professors from AMTAP, led by specialists and experts in the field from the Republic of Moldova. The idea of this project is to explore the local potential. Therefore we intend to work with local experts, inviting them to contribute to the topic – the Public Space and Sphere, the emphasis being put on a series of curatorial practices and on arts organizations/initiatives from Moldova (Lilia DRAGNEVA).

The lecture will focus on describing and analyzing the independent organizations from Moldova from the perspective of their geographic location, which conditions their strategic orientations and their activities, dictated by the managed space.
The project KunsTraume, launched by the Goethe Institute – Bucharest and the Foreign Ministry of Germany in Moldova will also be presented. A project that was launched in order to explore the possibilities of the artistic community from Moldova to claim the abandoned or unused spaces and to reutilize them in the interest of civil society and the local community.

The event “Public Space Bucharest” from 2007, curated by Marius Babias and Sabine Hentzsch has been an axis moment in which the selected local artists defined the work through interventions in the public space, involving together contemporary art, architecture, urbanistic development, education, youth culture. The course will present curator strategies and the answer of artist such as Mircea Cantor, Anetta Mona Chisa, Lucia Tkacova, Nicoleta Esinencu, H.arta, Daniel Knorr, Dan Perjovschi, and Lia Perjovschi.

In his presentation Vladimir Us will speak about the projects organized by the Oberliht Association in the past seven years, highlighting a number of artistic interventions which took place outside of traditional cultural institutions (the projects INTERVENTIONS, CHIOȘC, the Civic Centre of Chisinau). These projects drew together artists, architects, sociologists, activists and other participants expressing interest in the transformations undergone by the public space in Chisinau, the goal being that of creating, through such cultural interventions, a truly public space.
This effort became possible via self-education and self-organization as well as through the development of a new cultural and digital infrastructure, which is better suited to the needs of independent cultural entities in Moldova, offering an alternative to the institutional environment and proposing new ways of engaging with the public.

Not only the surrounding reality, but the sight itself is a historic reality, and the stake of contemporary art, remains the relation to sensibilities in process of forming. The course proposes an introduction – with examples – in a dimension of contemporary theory which are closely related successful practices of social contemporary art in the international circuit.

6th of February 2015, 1 pm
Vitalie SPRINCEANA: The cultural public sphere and its transformations

12th of March 2015, 1 pm
Stefan RUSU: Curator practices and the transformation of public sphere in the post-socialist context. The case of the Republic of Moldova and the city of Chisinau

The objective of this lecture will be the processes of urban transformation which took place in the city of Chisinau in the socialist period (between 1944-1989), but also in the period of independence after 92 that will be correlated with the aspects of the transformation of public sphere investigated as part of project CHISINAU – Art, Research in the Public Sphere realized by KSAK Center in 2010. Another important aspect that we will discuss is the interdisciplinary format through which there have been analyzed the dominating political and institutional discourses that shaped the society and the urban scape in the recent history. Beside these basic directions of the project, there will be presented the artistic practices of some visual artists from Moldova (Tatiana Fiodorova, Dumitru Oboroc, Ghenadie Popescu etc.) and others within the Eastern-European context (Joanna Raikovska/PL, Nomeda and Gediminas URBONAS/NL-LT, Rena RAEDLE and Vadan JEREMIC, DE-SRB, Indre KLIMAITE/LT).

The lecture will be focused on curator and artistic practices for activating the public space. This would especially include the project Spaces in Motion organized in 2014 in Dushanbe, which investigated the status of public spaces and the method of activation through artistic and social practices within the context of Central Asia. We will present strategies and tactics of activation of the public space under the conditions of authoritarian regimes and the precarious conditions in which the NGOs in the region activate.
On the other hand we will speak about artistic practices, especially we will present Stefan Rusu’s practice. Starting with 2008, Stefan Rusu developed a series of projects-interventions in the public space, among which is the replica of a socialist apartment (one-room flat) – the Open Apartment, produced in collaboration with Oberliht Association, which was activated in 2009 and is part of the creation of a platform for cultural productions and the process of regeneration of the public space in Chisinau.
Another intervention, Block 89, has been realized as part of itinerary project KNOT in the Ursinov microdistrict in Warsaw. Somehow following the same path of activating the public space in the suburb of the city of Stockholm has been realized the Floating Balcony, which tackled the issue of the segregation of migratory population and the gentrification of the residential area in the Husby suburb, and also the question of erasing the “green line” from the development plan of the area.