Not recommended for those under 16 years of age

concept:
“Invisible Duets” is a kind of, nascent of boredom, ‘flânerie’. Drifts, walks, stories – always starting anew, and always retelling one another; present and disappearing; seen and rejected.
superstructure:
“One might therefore believe that everything that disappears, even after disappearance leads a secret life after death, putting on all that is left, a latent effect. For all that disappears, permeates our lives in minimal doses, often much more dangerous for us than the prevailing powers … “Jean Baudrillard, Why Hasn’t Everything Already Disappeared?
story:
“Invisible Duets” – 42nd premiere of Dada von Bzdülöw Theatre – yet, it’s only the second ‘duet’ of its founders and artistic leaders. After nine years since the release of the legendary ‘Magnolia’ (2002), the time has come for Chmielewska-Bzdyl ‘duo’ to write the next chapter, a replica? A recycling ? To extract the latent ? To close or open a new? ‘Invisible Duets’, just like the latest productions of Dada, want to be a ‘half-closed’ performance, ready for some evolution within each subsequent presentation.
irony:
we live in the country since the collapse of the national orchestra we play for hens and geese and frogs in the pond.
Grzegorz Kwiatkowski

It’s hard to talk about the artistic concepts of Dada von Bzdülöw without resorting to verbal banality. Almost always it arouses admiration, and yet, this is so vague and little saying word. This time, the power of “Invisible Duets”, a dancing unity – Chmielewska and Bzdyl, have induced emotional paralysis among the audience. The resonance of such a strong reflective kick is hard to measure even on the Richter scale.
Anna Kołodziejska, Teatralia Trójmiasto

Dada von Bzdülöw Theatre was founded by Katarzyna Chmielewska and Leszek Bzdyl; on stage since 1993; is an independent group of professional dancers and actors, which produces performances in cooperation with Polish and foreign cultural institutions, such as: Teatr Wybrzeże /Gdańsk; Klub Żak /Gdańsk; Dance Advance /Philadelphia, USA; Les Hivernales /Avignon, France; Old Brewery /Poznań; Teatr Nowy /Łódź. Since 2008 the theatre is represented by the Dada von Bzdülöw Artists Association with its seat in Gdańsk, and since 2009 affiliated with Teatr Wybrzeże, Gdańsk, where they have regularly produced and staged performances, eg. Red Grass (2009), Caffe Latte (2009), Le Sacre (2010), Invisible Duets (2011), Enclave 4/7 (2013), Play it, so 17 dances about something (2013), Transmigrazione di fermenti d’amore (2014). Dada Theatre have yet performed in 25 European States, in China, India, South Korea and USA.

“Dada artists have contributed a new quality to our Polish understanding of theatre – by opposing the established divisions, Dada have overstepped the bounds of the provinces. Leszek Bzdyl and Katarzyna Chmielewska – the founders and leaders of Dada, have made a new theatre, somehow overstepping the bounds of drama theatre and dance floor, and yet, firmly standing on stage. Hence perhaps, the irresistible impression that contrary to a correct imitation that can be seen on a Polish stage so often, our ‘Dadaists’ offer something genuinely native – without a complex.”
Jadwiga Majewska, www.kongreskultury.pl 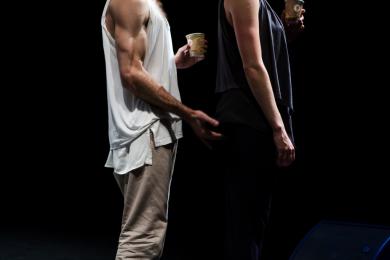 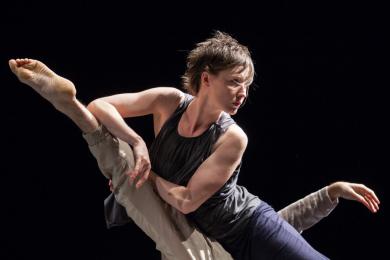 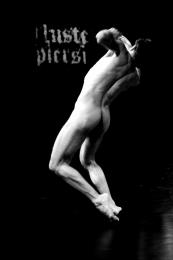