The motto of the festival is: Theatre – hero of our times. Starting August 28th, 2015, under the new hat of the National Theatre of Bucharest, initiator, organizer and host, The NETA 2015 International Theatre Festival will be taking place, an ample theatrical event that will reunite in Bucharest 13 theatrical productions from 10 countriesmembers of the NETA network.

NETA (New European Theatre Action), a network in which the “I.L.Caragiale” National Theatre of Bucharest is a founding member, became, in a decade of activity, one of the most important European theatrical associations, its activity supported by the European Council and EACEA (Education, Audiovisual and Culture Executive Agency). At the same time, it is the most ample theatrical association of this type in Europe, reuniting 68 members (national theatres, companies, festivals) from 20 European countries, with a plan of expanding its activity beyond the old continent’s borders in the near future.

NETA festival board selected the following 11 performances accompanied by 2 NETA co-productions, which will be presented in competition program: 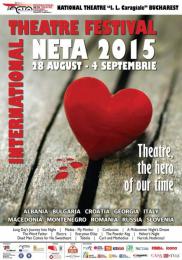