The XXII edition of the Sibiu International Theatre Festival will take place between 12 - 21 of June.

The programme of the XXII edition of the Sibiu International Theatre Festival carries on the tradition of providing a cultural offer of highest level and proposes a worldwide journey through the medium of some of the most dynamic theatre companies.

Deutsches Theater Berlin represents one of the most valuable theatrical movements in Europe and is presenting this year at Sibiu “Mother Tongue Mameloschn”, directed by Brit Bartkowiak.

Polski Teatr houses some of the most prolific European artists, staging performances of distinguished personalities like Jerzy Jarocki and Krystian Lupa. This year the Polish company is bringing the performance “Courtney Love” to Romania.

Kote Marjanishvili National Theatre of Georgia will be represented by director Levan Tsuladze, with the production of “Mad Man’s Story”, a point of reference in the reinvention of modern theatre.

The Vienna National Theatre will attend the festival with “Moscow - Petushki”, a postmodern masterpiece directed by Felicitas Braun.

Klaus Maria Brandauer, a laureate of the award for Best Actor at Cannes Festival (“Mephisto” - 1981), and an OSCAR nominee for the Award for Best Actor in a Supporting Role (“Out of Africa” - 1986), will be present in Sibiu with the performance “Krapp’s last Tape”, directed by Peter Stein, a performance that pays tribute to Samuel Beckett.

Eimuntas Nekrosius, one of the highest rated directors at the moment, returns to Sibiu with the performance “Book of Job” of the Meno Fortas Theatre.

Daniel Veronese, one of the most significant theatre personalities in South America, will be presenting “The Lambs” in a European premiere. 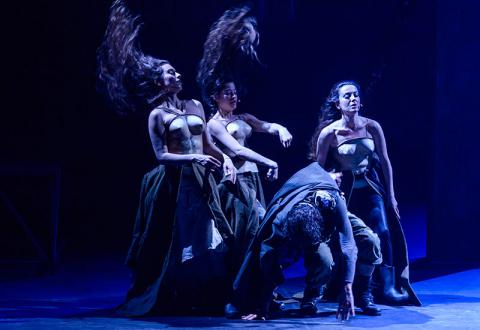 This year’s edition of the festival carries on the fascinating series of exceptional contemporary dance performances.

For his first time in Romania, choreographer Barak Marshall presents “Wonderland”, a unique production that exploits the vibrant essence of the dancers of Inbal Dance Theatre Company (Israel), providing a new outlook on humanity through the technique of disintegrated movement.

One of the most provoking dancers in China, Jin Xing (whose name literally translates as “the golden star”), and her company Jin Xing Dance Theatre Shanghai, will be presenting the performance “Different Loneliness”, a spectacle defined by a graceful, subtle choreography, with an exhilarating visual impact.

Sengiku Bando, one of the most renowned traditional dancers in Japan, presents, in worldwide premiere, a new version of “The Another Chushingura”, a work that has its roots in the classical Kabuki theatre and that is reinvented through a modern aesthetics of body language.

Gigi Căciuleanu returns to Sibiu with a new performance of choreographic theatre. “Imagine all the people” (Opera Națională Română Iași) puts forward a series of short stories, confessions about remarkable people, through which the author unfolds poetic images into all aspects of dialogue.

As a premiere in the programme of the festival, the Austrian dancer and choreographer of Turkish origin, Ziya Azazi, brings to Sibiu one of the most elegant dances of the universal patrimony: “Dervish”. During the process of shaping his individuality and dance skills, Ziya Azazi was influenced by Sufism, an existential philosophy centred on mysticism, as his creations bear the hallmark of breathtaking representations that are memorable.

“Flamenco 5 stars” is certainly one of the most expected performances coming to Sibiu this year. Five of the most renowned Spanish dancers (Jesus Carmona, Lola Greco, Karime Amaya, Jose Maldonado, Ana Arroyo) will be together on stage for the first time, in Sibiu, taking us on a journey through the art of the classical Spanish dance, starting from its roots to the present.

To learn more about the festival and its programme, visit www.sibfest.ro/