The workshop will focus on the multidisciplinary aspect of the process of preparation of performances and plays. The ways of planning the artistic process and the selection of the best medium for the individual artistic statement, both for actors and directors, will be the centre of attention.

An important element in Magdalena Szpecht's theatrical practice is the search for new territories for the documentary theatre. The question that the director elaborates in her work is that of the tools and languages of the theatre that can be helpful in this process. The theatre is also the perfect space for experiments concerning communications: between artists, who create a common work; between anything and anyone present on the stage (from the performers through the props to the ideas accompanying art); and ultimately between the stage and the audience. Each of those spaces of communication comes with distinct challenges and imposes on both sides a different kind of responsibility for the possibility of communication. An attempt to assume a new perspective and to abandon old prejudices or ways of thinking is for Magdalena Szpecht the first and the most important step towards fully utilising the experimental potential of the theatre as a medium.

Weronika Pelczyńska: dancer and choreographer, graduate of the SEAD dance school in Salzburg and the Warsaw University of Technology's Faculty of Production Engineering. Since her debut in the productions of Studio Buffo Theatre and Mufmi Dance Theatre, she has worked as a dancer and performer with ensembles in Poland, Germany, Austria, France, and Croatia. She participates in the productions of the Warsaw Commune (Komuna//Warszawa) and the Old Brewery New Dance (Stary Browar, nowy taniec) programme in Poznań.

Since 2010, she has prepared choreography for theatre productions, films, and videos. Her collaborators in the theatre include Agnieszka Glińska, Robert Jarosz, Anna Seniuk, and Paweł Passini. She co-operated with filmmakers such as Barbara Sass-Zdort, Zuzanna Solakiewicz, Bartek Prokopowicz, Aneta Grzeszykowska, Krzysztof Skonieczny, and Michał Marczak.

She is interested in work at the intersection of various fields of art. She is a member of Centrum w Ruchu (www.centrumwruchu.pl), a Warsaw-based association of choreographers and performers.

Magdalena Szpecht, born in 1990 in Jelenia Góra, is a director and author of installations and performances. She studied creative writing at the Wrocław University before going on to study theatre directing at the Ludwik Solski Academy of Creative Arts in Kraków. She directed the performance "Dolphin_Who_Loved_Me", awarded at the Berlin 100° Festival and presented among others in Marseille, Hannover, Warsaw, and Bucarest. She was artist-in-residence at the NEDRAma Festival 2015 in Sofia with her project "Muzeum katastrof". She directed plays and performances such as "The possibility of an island", based on the novel by Michel Houellebecq, at Warsaw's Teatr Rozmaitości (December 2015); "Schubert, romantyczna kompozycja na dwunastu wykonawców i kwartet smyczkowy" at Teatr Dramatyczny in Wałbrzych (February 2016, received prizes for directing, music, and choreography at the 22nd competition for staging a contemporary Polish art"); "Małka Szwarcenkopf" at the Jewish Theatre in Warsaw (May 2016); "Internal monologue..." at Kraków's Old Theatre (June 2016). 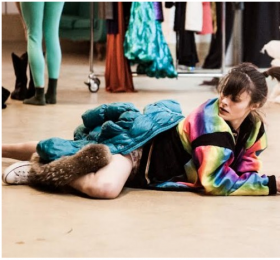