Dance at the Festival of a Courageous Spectator KioSK 2016 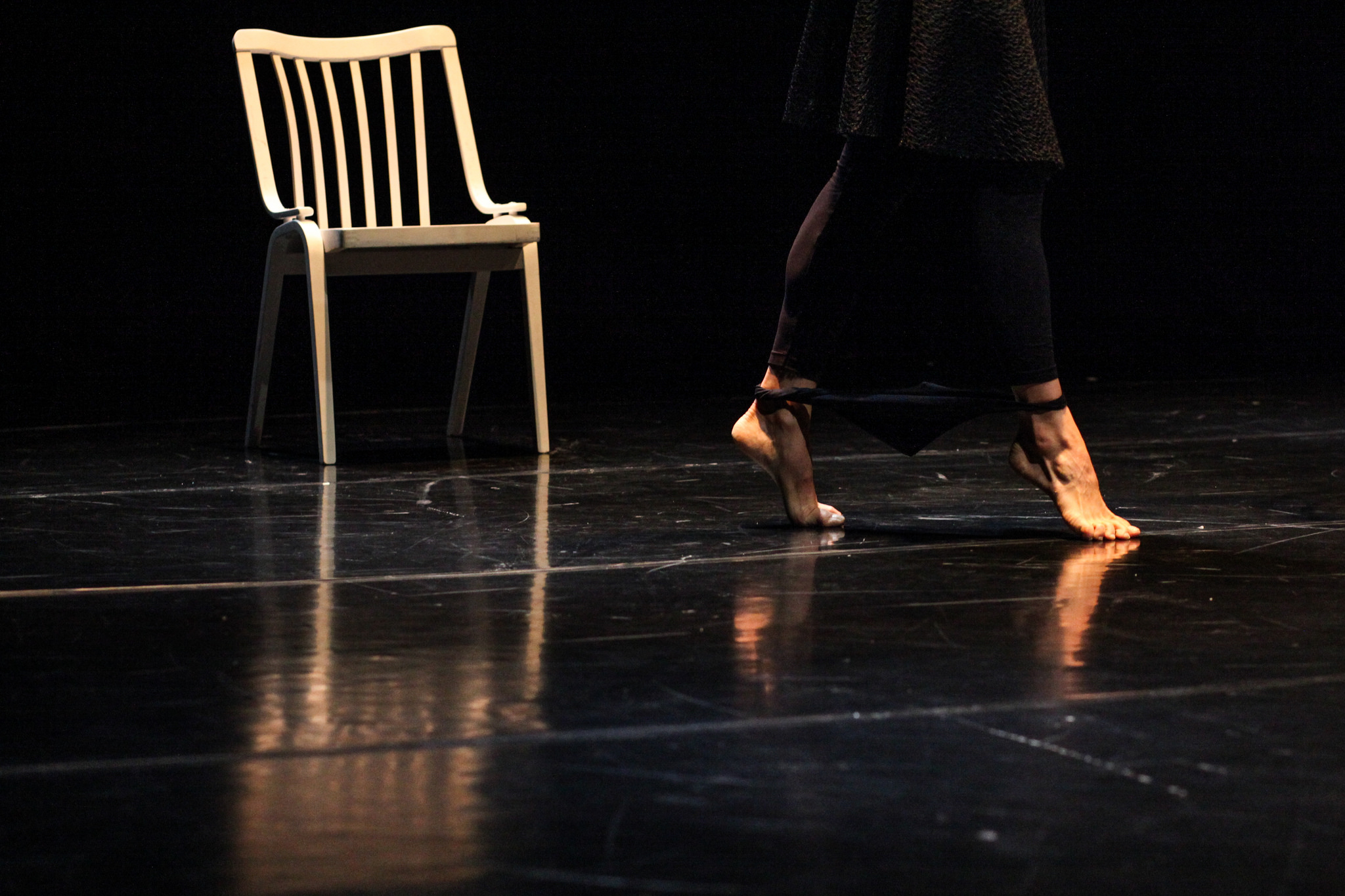 Dance at the Festival of a Courageous Spectator KioSK

In her dance solo Time to Be Opened (The Perception of), Eva Klimáčková (cie E7KA, France) placed a heavy accent on work with pure corporality: rhythmicalised articulations of limbs and other body parts (mainly elbows, soles, hands). On an empty scene we could see her movements only on the borders of the light-created square against dark background. Klimáčková’s individual movement scores corresponded with the dramaturgy of poems by the French poet of Romanian origin, Ghérasim Luca, which were reproduced during the performance. In moments of complete silence, the delicacy of specific dancer’s body parts underlined the elusiveness and miniature of expressiveness consciously presenting the continuity of living and perishing. Klimáčková presented her solo meditation of artistically tuned silhouettes (an authorial concept of artist Laurent Goldring) in the contrasts of light and dark (light design by Yann Le Bras). In her minimalistic concept the imaginary light square section created a symbol of existential light contrasting with the bordering sphere of not being, of nothingness and indifferent emptiness.

A dance performance of the Czech dancer of Slovak origin, Martina Hajdyla Lacová, could be understood as a certain form of meditation. In her impressive dance solo L/ One of the seven the Slovak choreographer Andrej Petrovič brought the theme of one of the deadly sins – lust (ME-SA, Andrej Petrovič, Czech Republic).

In contrast to the pure abstractness of the dance work of art of Eva Klimáčková, the choreographic concept of Andrej Petrovič specified the chosen topic in a much clearer way. Martina H. Lacová inconspicuously seized control of the stage by her hidden darkness and gloominess. Gradually she sophisticatedly spread the perceptible expansiveness of sin. From the very beginning she lay stuck among four legs of a white stylish chair in a static motionlessness. This sole dominant stage prop expressed a certain dependence of a man, or rather a pathological boundedness – coexistence with desire. The dark costume fitting tightly and revealing the curves of the dancer’s voluptuous as well as fragile body (Maroš Baran) strongly underlined femininity. The choreographer focused more on the ignominiousness of the deadly sin in a continuous monotonous darkness of sinking into its abyss. Under the weight of the devastating lust Hajdyla Lacová immersed into the thicket of lying ropes with shoes that evoked the symbol of vanity of lust in a one-sided apathetic tune.

Distinctiveness in a general choreographic approach was introduced by Milan Kozánek in a dance performance PURE (Dance Company ARTYCI/ Milan Kozánek). The absence of a story obviously opened space for two typologically different dancers Petr Ochvat and Radoslav Piovarči. Their expression foregrounded physical plasticity, rhythmical playfulness of the partners and their mutual harmony in kinetic interactions. At least this is how we could read the abstract, pure line of the created scores closely connected to the musical part. The presented duets contrastively alternated with the alienating dialogues of the dancers sitting on red chairs on the background in situations resembling time before training or a dance rehearsal.

The Slovak choreographer Anton Lachký, a member of a famous Belgian group Les Slovaks Dance Collective, presented a pathological dimension of communication in his dance performance Side effects (Anton Lachky Company). The conspicuously temperamental performance was led by the despotic Patricia Rotorando who continuously commanded, terrorized and humiliated her three dance partners (Milan Herich, Csaba Varga and Sara Sguotti) in a verbal and physical way (by smacks in their faces). In this case we could speak of an acting-dancing concert of the leading actress with her sparkling jealous and desirous voice reproduced through a microphone with comic facial expressions and overtly hyperbolized rendering. It is necessary to emphasize that the Side effects performance is about a dream of the main protagonist, or rather the dancers are characters from her dream. The despotic manipulator Patricia Rotorando kept introducing them to the audience several times in a row in a frantic repetition. We saw various forms of her eccentric perception and reflection of the world with targeted enthralment of each individual by the most elaborate means and strategies. In this case it was an advanced pathology of the mental state of the main protagonist with repeated explosions of histrionic nature (hysteria).

In his renewed dance solo Butticula – Figures of a fool, the Slovak dancer and choreographer Jaro Viňarský proceeded a priori from a targeted improvisation as one of the key elements of his choreographic (dance) penmanship. What triumphed in it was mainly the authentic otherness in the dynamics of the individual composed figures with the thematic changing of variations of a Fool and a King.

Other festival productions have brought courageous atypicality as well. This year, the creators brought a wide-ranging spectrum of untraditional topics that were often articulated ambitiously. For example, Petra Fornayová in her dance performance Opernball brought a politically engaged work of art with live musicians, a video projection and distinctive appellative and proclamatory gesture. Zuzana Kakalíková uncovered a biblical topic in her dance-theatre performance Expulsion from Paradise (Compagnie TDU et al.) in which she hit the undue restrictions and limits of this archetypal theme.

On the other hand, in her performance All that is beautiful should reproduce (D´Epog Theatre Brno, Czech Republic) the Slovak director Lucia Repašská strategically reflected the excessive and wide-spread festivity – entertainment till one is fit to drop.

In their scenic work of art Beauty and Disgust directed by Andrej Kalinka (Med a Prach, Bratislava) the creators from Bratislava group Med a Prach [Honey and Dust] thematised the overtly sacral dimension of the outlined “theatre mass” (a concert, installation, performance) with intensive searching for polarity of beauty and disgust – the hidden, real, valuable and sometimes the covered one.

We can claim that the festival dramaturges managed to construct a varying but also quite heterogeneous programme structure of contemporary art of movement created by Slovak choreographers/directors home as well as abroad. They tested the patience of the spectators mainly by the sum of mostly extreme experiences. According to tradition, for the seventh time in a row a special award “POČIN” [A DEED] was granted to a theatre performance by Anténa, a network for independent culture and Institute of light design. This year the jurors (Ján Ptačin, Guillaume T. Fromentin) decided to award a subtle dance work of art by Eva Klimáčková Times to be opened (The Perception of). The KioSK Festival also became an opportunity for the presentation of the Platforma pre súčasný tanec (PlaST) [Platform for Contemporary Dance]. Definitely, an inseparable part of this year’s summer festival consisted of night after-parties, sleepy morning discussions and workshops. This year, a significant attention was paid to the public presentation of a dance workshop by Belgian choreographer Karine Ponties (Dame de Pic, Brussels, Belgium) and light designer Guillaume T. Fromentin entitled Dancing body and light.  The accompanying festival programme contained, among others, an epic theatre trip to Vision Pyramid representing a unique land-art object by Juraja Gábor in fascinating natural scenery of the Súľov Rocks.

The ninth year of the KioSK festival was univocally worth to visit due to the unique experience of the atmosphere of a small intercultural island of freedom, independent creativity and experimental courage (anything but routine and boredom).