The Arts and Theatre Institute is currently publishing its very first e-book. The electronic book “GAME’S NOT OVER” – New Czech Plays (not only) for Your Tablet / E-Reader brings you recent plays by Czech authors. Even though the publication includes a broad spectrum of playwrights – beginning with the youngest generation up to 35 years of age (Radmila Adamová, Magdaléna Frydrych Gregorová, Petr Kolečko, Kateřina Rudčenková), middle-aged authors (David Drábek, Roman Sikora, Petr Zelenka), and also mature doyens of the Czech cultural scene (Arnošt Goldflam, Václav Havel, Milan Uhde) – all authors included are currently active personalities who have participated in contemporary Czech theatre, not just as playwrights and authors, but also as literary managers, directors and / or artistic directors.

Two Slovak authors – Vladislava Fekete and Viliam Klimáček – are added as a special bonus to the publication. Almost 20 years have passed since the division of Czechoslovakia, and the understanding of Slovak theatre as a foreign element has still not entirely taken place - not merely because of the language similarity, but also because of the persistent interconnection of the Czech and Slovak theatrical worlds. Proof of this can be found in the most prestigious dramatic competition in the field of contemporary drama in the Czech Republic awarded by the Alfréd Radok Foundation. Here, both Czech and Slovak authors annually participate with new original plays.

The dates of creation for the individual titles in the e-book “GAME’S NOT OVER – New Czech Plays (not only) for Your Tablet / E-Reader”, begin in 2004 and end with brand new Czech and Slovak plays from 2010. Even so, all of these published plays have already found their way to the Czech stages, and many of them have also seen the top places at the Alfréd Radok Awards. Their topics vary, reflecting the diversity of their authors, and offer a range of different topics such as: explicitly political topics; the coexistence of generations; reflections on life in the world of modern technologies; to portrayals of picturesque details of Czech reality. Now you are invited to make your own game with contemporary Czech (and Slovak) plays.

The e-book “GAME´S NOT OVER - New Czech Plays (not only) for Your Tablet / E-Reader” was published in cooperation with Aura-Pont and DILIA. 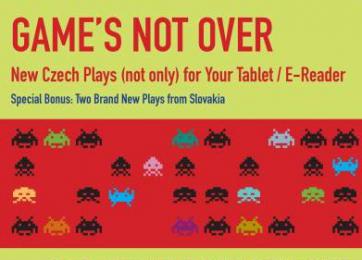