The second session of the Theatre Laboratory was organized together with EEPAP strategic partner organizations from Lviv: Art Workshop Drabyna, and The First Scene of New Drama „Drama.UA”, with a cooperation of Theatre Platform based in Kyiv.  It took place in Lviv, Ukraine between 17 and 23 of November 2014.

During the autumn session of the Laboratory in Lviv we dealt with the medium of theatre. We explored its capacity to communicate experience and thoughts of the creators themselves - unrestrained by a finite, ready-made "artistic" form. At the same time all the discussions, texts, as well as the final performance - while focusing on theatre and the role of the artist - also discussed the social and political situation in Ukraine, the war, the country and individual and collective responsibility.

Many texts were created during the workshop, among them the "the pissed monologues", focusing on the worst personal theatrical experience of the last half-year, a series of curses and compliments, a set of the most pestering questions about theatre and the place of the creator; a list of imagined "critical projects" that could be carried out in Ukraine; auto presentations of the participants which mix truth and fiction.

The intensive work done during the laboratory was concluded by a public performance of "Why think", staged at the First Scene of New Drama "Drama.UA". This "act of public thinking" was an extremely demanding experience, both for the creators and the audience: a group of theatre producers (not actors) performed with no safeguards - no ready script, no closed structure or fixed time framework. We abandoned the hierarchical division of roles: there was no leader (a tutor, director or scriptwriter) to oversee the realisation of a plan, and there were no executors. The performers employed various materials created during the workshop (texts, video recordings, scenes of improvised discussions), but their main objective was not to recreate the prepared scenes and "numbers", but to uncover the process of thinking which takes place here and now, before the audience - the risk of it being ineffective, insufficiently drafted, imprecise included. This gave rise to a unique theatrical event: a two-and-a-half hour, polyphonic expression which thematizes the experiences of the participants of the Laboratory - as artists and citizens working in a specific cultural, social and political context.

The Lviv session was organized as part of the DESANT educational project in Ukraine. DESANT has been carried out by the East European Performing Arts Platform (EEPAP) since 2012 and is addressed at artists, critics and theoreticians of performing arts in the Eastern Partnership countries. The DESANT activities are rooted in local reality and related to a specific socio-political context; they combine workshop elements with theoretical reflection and are created in close cooperation with partner organisations. 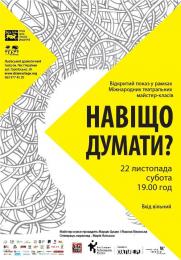