Mystery-Bouffe is a socialist dramatic play written by Russian poet and playwright Vladimir Mayakovski between 1918 and 1921. The play is a spectacular hymn to the working class revolution that overthrew the Russian bourgeoisie and its monarchy in order to establish a utopian commune.

A century later, the society is in a similar social situation where the working class is disappointed by the outcome of revolution. Communism and socialism were substituted by capitalism: with the economy is in a crisis, the workers are underpaid or not paid at all. The welfare of a commoner is worsening, while the elite continues to prosper on behalf of the exploitation of working people.

The play is a humorous warning to fellow Homo sapiens who have the tendency to forget that history repeats itself. The next warning will probably not be as funny as is Mystery-Bouffe.

The play premiered on April 8h 2011.
“Mystery-Bouffe” is intended for all audiences.
The duration of the play is one hour.


You can purchase the tickets at the cashier’s desk one hour before start. However, the theatre strongly recommend you to reserve your tickets by sending an e-mail to [email protected] (to be collected one our before start) or simply purchase them online at Mojekarte.si. 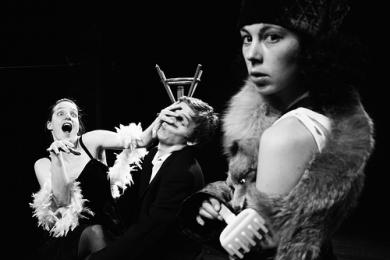