The project focuses on the 2004 theft of Edward Munch’s cult painting “Scream” in Oslo. The painting will be exhibited again in London for the 2012 Olympics. Scream introduces Zlatan Jašarević, the man who stole the painting, was never caught and who actually destroyed the painting upon stealing it.

The play explores the link between Edward Munch’s biography, the story of how the painting was made, the media stories after its disappearance, Zlatan Jašarević and his connection to the woman who worked as a security guard in the Munch museum at the time of the theft.

It explores the causal connection between the artist and the person who stole his painting almost 100 years after its creation.

The performance deals with the mechanisms of rhetoric, and the art of manipulation that directs the course of media, legislation and historical events.

The performance explores how to exploit the conditions of different media and the transitions between them from digital to physical, and from virtual to real. “Scream” is a manual on how to become a terrorist in three years.

“Scream” is intended for general audiences.
The duration of the play is 45 minutes.
The play is suitable for festivals and international events.

You can purchase tickets one hour before the play at the cashier’s desk. However, the theatre strongly recommends that you reserve your ticket by sending an e-mail to [email protected] (to be collected one hour before start) or purchase them online at Mojekarte.si. 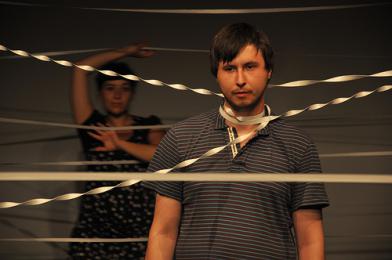