Tickets can be purchased at the Bitef theatre on the day of performance at the box office two hours before start, usually from 18 to 20pm.
Reservation: +381 69 899 24 00, [email protected]

Having had great success with the dance performance Othelo at the Budva festival, at Bitef theatre, and at several other festivals and stages in the region, Divine have embarked on another new challenge with their partner Budva theatre city with their staging of Dante’s “Divine comedy”. Choosing a choreographer was easy.

Edward Clug:
“The idea of doing “Divine Comedy” in a form of dance seems to me like a suicide, a very tempting one... Ironically I found my motive in Dante s very own "suicidal attempt", to walk the realm of death while being among the living. I wonder if he would do it again nowadays and how his Divina would look like? Probably the construction of the poem would be the same: three deferent levels of the soul’s condition, maybe he would add some modern, more sophisticated sins and probably change the order of their gravity with the old ones. A lot of things would be probably deferent, but I am convinced that time would never change his love for Beatrice.

My intention with this performance is to create a situation room, a lateral rather then a parallel vision of the three levels of the poem, in which we find the eight dancers in unusual postures.

Hell is placed in the contest of Standard dances in which the dancers are the competitors and judges at the same time. The form of Standard dances describes very well the criteria that our modern society is demanding: To be, perfect, competitive, beautifully fake and carry a number (well monitored) which may be erased and replaced while you are still alive.

Dialog and interaction between the real and surreal is the relative principle of my concept. We all have deferent perceptions on what we see and how we translate our experiences related to the object observed. Time will gather us for an hour in which time itself will have deferent meaning for each-one of us. For example, the purgatory in my vision is measured in 12 minutes, which is the amount of time needed for spaghetti to be cooked. The same amount of time has a deferent length in the theatre and a deferent one in paradise:
I want  to bite a piece of Dante s love, to chew it for hundreds of years and than, when my facial muscles get tired and l lose all of my teeth, to swallow it slowly and fall in to a long sleep. Wake up next morning and rush into the next ordinary day being a consequent number with its consequent location.

HELL(O) IN HEAVEN! This is the idea and the motive of our journey. 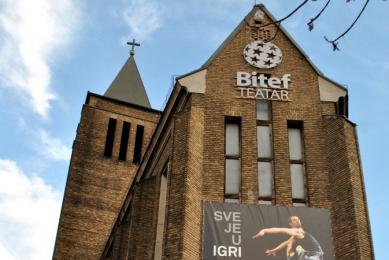