“Be yourself, express yourself! There’s nothing to be ashamed of!”
This notion is one of the most notorious imperatives of contemporary society. It seems that today the world is completely open, ready to accept us, as we are – no more restraints, no more shame. Contemporary media culture demands of us to be open, to share opinions, to express feelings, to be critical, to be entertaining… It looks like shame is something from the past century, something pre-modern. Shame simply doesn’t fit in our contemporary identities.

But at a deeper level we can sense that shame does not really disappear – we just repressed its symbolic function. In spite of denial, shame remains as a secret structure of each subjectivity – persisting as some stubborn surplus of humanity. In contemporary media culture shame is ashamed of itself. Media reality has become a masquerade of insecure individuals hiding behind their public faces and defending their dignity – hiding their shame.
And so is our performance. Hiding behind characters, defending their dignity and denying their shame is our basic performing strategy. For "Shame" we created numerous fictional, biographic, fairy-tale, allegorical and absurd characters and hid ourselves behind them. We use the stage as a space for parodying fictional identities.

This performance questions the individual’s responsibility in contemporary society – a society in recession, shock, precarious livelihood, insecurity and carelessness. What kind of action would it take to trigger a change? Is democracy nothing but an empty ritual of endless dialogues that lead nowhere? Who will take the responsibility and do something without backing down? Is violence really the only way out?

The performance tackles this question in combination with the documentary and fictional approach. Who’s Next? makes the genres of film, music and choreography interact while constantly forming a space for actors as well as the audience to negotiate their future action. Something has to be done, no doubt about that. But the question is what and how? Is it possible to do something in theatre perhaps? Could theatre act as a place of action?

The performance was conceived in the framework of the project entitled Pre-premiere, which since 2003 has become an annual evening event of young dancers from the Arts High School in Ljubljana. Pre-premiere is a contemporary and relevant artistic evening with a distinctly recognizable expression, surpassing the form of mere high school productions and standing side by side with professional performances. "Nostalgia’s Nostalgia" came into being through the reconstruction of Ksenija Hribar’s performances – Alpine Daydreaming (1986) and Nostalgia (1987). The performance was given a substantial amount of public attention and won the award for the best dance performance and the best mentors’ team at the 26th Transgenerations Festival.

The performance "Nostalgia" from 1987, conceived by the late Slovene choreographer Ksenija Hribar, thematically revolves around the winter solstice and the related old pagan customs, Christian mythology and the present New Year celebrations.
The performance is accompanied by an introduction of contemporary dance art through the ears and the mouth of the young performers and their mentors, some of the top artists in the area.

We are starting an intensive research of movement with real, as well as unreal ellipses. They invite us into the beauty and strained insanity of their interior relations. Namely, each ellipse is composed of two independent interior focuses and of constantly changing relations between them. A pretty attractive definition for many realities we are involved in.

Modern life is full of networks, either social, family, friends, business or bureaucratic ones. The essential things are not only the connections, but also the voids. There is no net without any holes or voids, which it embraces, but never completely covers.

How shall we conceive/think of this emptiness? Is a void a point linked with a net, or is it the network itself that places the points in a slightly different constellation each time? Are the nets, the points or the voids what makes us move, or do we move them ourselves…?

How to stage something as performative as shame? How to speak about something that eludes words? How to address the audience without causing shame?

Shame speaks through many languages. Bodies, sounds, music, images, and words all speak out at the same time. What they want to tell lies in the overlaps and gaps between individual languages. They articulate the subjects on stage and the subjects in front of it in a way that evades unambiguous signification, just like the subjects themselves do: with stillness, delays, interruptions, twists, hesitations, duplications, echoes.

We are never entirely or only here, we are always somewhere else as well – where we can at least for a moment believe that we are someone else or at least dream to be someone else. Sometimes we even act ourselves. We stand witness to our own objectification when the body, controlled by its own subjection to the gaze, has to respond with what deprives it of its voice. (Tea Hvala)

WE ANNOUNCE: And what do others have to say?
Discussion evenings at Stara mestna elektrarna – where we delve into the heart of the contemporary world

We see information spaces expand and contemplation spaces narrow. Constant time pressure or character limits in text messages push us into sending instant replies that lack the juicy bits and the effort required for a more profound level of communication. We refuse to become prisoners of the shallow banality of everyday life or hostages to its rapid pace, which is why we are inviting you to come down to Stara mestna elektrarna, where the evenings will taste of contemporary time and of contemplative thought about the future; all this in pace that allows for reflective stance and pleasure.

We yearn for brave and ardent debates to go on, debates that could make all the whining go away and inspire us for actions that might change the world.
The first debate cycle will take place from March to June every second Tuesday in the month. The first four evenings will taste like: freedom, time, prosperity and the new world. 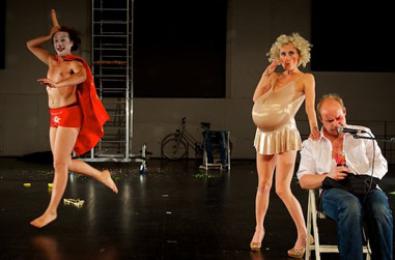