Further programme information can be found online:
www.pazzfestival.de from mid-February.

PAZZ 2012 is looking for three unique and novel interventions, actions and installations, one for each container: a provocation, investigation or offer linked to the festival theme TRANZZFER (transfer, transmission and relaying of information).

A performative project with a crossover to other artistic areas. Violations in non-artistic areas (such as sport, sociology, politics and botany) are welcomed both in form and content.

This project is part of the artists’ colony consisting of numerous artistic projects from all over the world and will be broadcast simultaneously in Oldenburg. The project makes inroads into the audience and society, consciously aiming to win over new spectators and integrate them into the performance so as to allow them to participate.

TRANZZFER: A week in a state of emergency as part of the artists’ colony. This will be a utopia for the entire city, for the audience, art and society.

PAZZ is an international Performing Arts Festival that takes place every two years at the Oldenburgisches Staatstheater in and around the Exerzierhalle. On the festival grounds, the Container City will function as a centre for information and accommodation for audience members as well as an artists’ colony. The different containers will be assigned different purposes: alongside practical uses such as kiosks, internet and info points, it will serve as a social and communicative meeting point for discussion and workshops as well as performance space.

This call for proposals is directed at performers, theatre-makers and artists from all walks of life and from experts from all other areas, Oldenburg residents and the rest of the world, individuals as well as groups. The projects will be chosen by a professional jury and presented as a part of PAZZ.

For every project chosen there will a production budget available of up to 2,500€ in addition to travelling costs, board and lodging during the period of the PAZZ festival 2012 is also included.

The project should be presented on a total of up to three pages of A4 (including plans, pictures, drawings and so on). Additionally, there should be one page with a budget suggestion and contact details of a contact person (name, address, email, telephone number). The closing date is Saturday, 18 February 2012. Applications by mail to [email protected] with the subject line TRANZZFER_CONTAINERCONTEST.

The results will be announced on March 5th 2012. The jury reserves the right not to comment on their decision. Provided materials cannot be returned.

Applicants must be available to discuss their project and for mentoring in Oldenburg in March 2012 (to be decided), for a production phase in Oldenburg prior to April 20th 2012 as well to present and carry out the project during PAZZ 2012 from April 20-29th 2012. 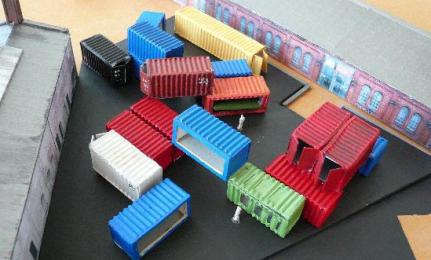