Five intensive days with Mike Bernardin: "What happens to you doesn't depend on you, it depends on the other fellow" - Sanford Meisner.


The Introduction Course will be an intensive five days course. Participants will explore the elemental exercises in Meisner's revolutionary approach to acting, and their impact on how to work with the text.

The course is designed for actors wanting to experience this Technique for the first time and discover the immediate benefits and implications for acting.

Participants: This course is for professionals and for actors who have just started out, both for those that are already familiar with the Meisner Technique and those that are not.

Mike Bernardin was trained in London as an actor at the Mountview Theatre School, and subsequently from 1989 studied physical theatre with Desmond Jones and the Meisner Technique. As an actor his experience includes the West End productions "Blood Brothers", "The Patsy Cline Story" and "The Beautiful Game". As well as, "The Duchess of Malfi" directed by Phyllida Lloyd, and "Edward Bond’s Lear" directed by Tim Stark - both for the Royal National Theatre.

He can also be seen in "The Merchant of Venice", "Of Mice and Men", Justin Butcher’s buffo-inspired "Passion" (all national tours), "Romeo and Juliet" (Bracknell), "Dial M for Murder" (London), "The Trojan Women" (Cheltenham). For the Original Shakespeare Company: Angelo in "Measure for Measure" (Cambridge) and Bertram in "All’s Well that Ends Well" (London). Most recently he has acted for the screen as leading character in “Krakatoa” for Channel 4 and HBO.

As a director, Mike Bernardin has been the Artistic Director of the Fervent Theatre Company where he directed and produced over thirty productions during six years. Most recently these have included Patrick Marber’s “Closer”, John Steinbeck‘s “Of Mice and Men”, William Shakespeare‘s “Twelfth Night”, Stephen Sondheim’s “Company”, Tom Kempinski’s “Duet for One”, David Mamet‘s “Oleanna” and “Speed the Plow” and Edward Albee’s “The Zoo Story”.

Actors-Space Berlin on their background:

“Actors-Space Berlin is just that - a space for actors; to meet, to work, to create a network, to extend your range, to explore, to forge new paths, to play, and to relax.

Conceived as collaboration between actors, directors, coaches and other colleagues, Actors-Space Berlin began its life early last year at the Aqua Carré in Lobeck Strasse when it was hosting Mike Bernardin's Meisner Technique acting classes.

We have now established our unique Year-Long acting programme which is taught by the co-director André Bolouri. We also teach other regular classes such as; Actors' Movement, Voice, Scene Analysis, Coaching for English Text, individual Role Preparation; each offered by experts in their fields from Berlin, the UK and the USA.

We are constantly told that too many actors are chasing the scarce jobs, that we are in competition with each other, that we are exchangeable, and that we are the last (and least important) element of the creative process. This is not true. Joining the Actors-Space Berlin adds a voice to collaboration, respect, and the pursuit of excellence.
No qualifications are requisite for becoming a member of the Actors-Space, and it commits you to nothing. But it offers a chance to find that there is, after all, a community of actors – write”. 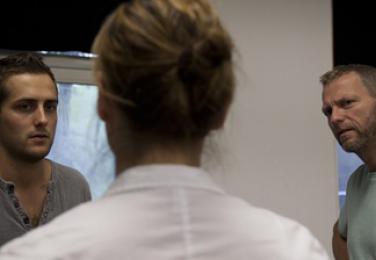