"Caffè Latte" is the result of cooperation between artists from Dada Theatre, Gdańsk, and SzaZa, a music duo from Warsaw. The show is an exchange of energy between music and dance that goes well together; yet, Caffè Latte’s artists, knowing that this natural merger of music and dance can be fraught with aesthetic smugness, chose an open structure, some unexpectedness and free association.

SzaZa seduced Dada / Dada seduced SzaZa.
Seduced by one another, they decided to drink "Caffè Latte" before the audience’s eyes; they will be shamelessly sipping at this most bizarre drink, being neither a stimulating coffee, nor healthy milk. The drink standing somehow undefined, judging by the author’s palate. While drinking the undefined "Caffè Latte", the audience will be seduced many times over as the performance unfolds. Yet, as contemporary theatre seems full of new performance aesthetics, Dada/Szaza will be creating a performance through the experimental aspect of fun, or finding the funny aspect of an experiment.
SzaZa and Dada will be seducing one another before the eyes of those who decide to see the performance, and it is neither a performance encrusted with music, nor a concert made more appealing with dance poses.

"Caffè Latte" does not want to be viewed as a finished work, but a work under constant development.

"This new step in creative research by Dada is both a daring attempt to make a performance combing dance, music and the performing arts, and an excellent and energetic piece of fun “half jokingly, half serious". There is something for everyone is this performance.
Łukasz Rudziński, Trójmiasto.pl

"Patryk Zakrocki and Paweł Szamburski, thanks to their improvisation practice and all readiness to get to grips with the task, set the stage for a new form of art. It is full of spontaneity, natural lightness, freedom, and sense of humor. Dada takes the audience, who are expecting a clear picture, up the garden path. “Caffe Latte” is a drink to be had in full, but in sips, in a lazy manner. Made of good quality coffee beans, properly ground, seducing with its rich aroma".
Marta Kula, Nowytaniec.pl

"A dialogue between dancers and musicians, or rather - mutual fascination and seduction - appears to be the roots of the performance from which a trunk is growing, giving off branches in front of the eyes of those being seduced.

Dada is talking while talking about talking, and yet, denying the talking; dancing and denying the dancing. Talking about a confusion of languages when building The Tower of Babel while simultaneously talking about the blessing of this confusion. (...) All four can be typified by greed for music, greed for dance, greed for art, and for life in general".
Tadeusz Skutnik, "Dziennik Bałtycki" 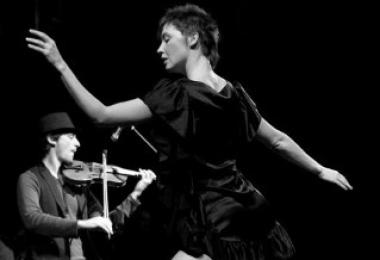