The Academy of Music, Theatre and Fine Arts in Chisinau, Republic of Moldova will, in collaboration with the Ministry of Culture, starting the April 2nd through April 7th 2012, organize the 2nd edition of the "ClassFest" International Festival of Theatre and Film Schools.

This cultural event will make its contribution to the realization of theatre and film dialogue through a cross- and transnational approach. There will be invitees from the following countries: Romania, Republic of Moldova, Belarus, Georgia, Czech Republic, Germany, Ukraine, Poland, Slovakia and Russia.

Students of theater and film are set to partake in a workshop held by professor Janusz Stolarski from Poland, and a group of students from Germany will present a performance which is still in progress, conducted by professor David Esrig, actor and stage director. In the matter of European integration, the festival aims to become an influential center of culture and non-formal education for students, and a place of artistic expression. There will be an exchange of ideas between the members of the participating troupes and students, theater and filmmakers.

This cultural event wants to become a platform for recognition of European education, for the creative dialogue, as well as a mobile space of the young people – all these are considered as the expressive requirements of the current cultural educational reality.

This event will become a meeting place for local and foreign troupes, theatre and film media professionals, teachers, students and spectators. Organisers expect the student festival of theater and film to have an impact on the audience and on the cultural education for spectators of all ages (children, adolescents, students and matures).

The project’s goal is to promote personal development and creativity through sharing creative works using different artistic approaches. The project aims to present students’ achievements: exchanging experiences of performances and films, methods and views, all this in order to develop the intercultural dialogue beyond the current cultural and linguistic geographical barriers. The participants will promote the national and cultural values of their country, and The "ClassFest" International Festival of Theatre and Film Schools is the only international artistic action conducted for and about youths and students from Moldova, promoting contemporary art values.

Starting with 2012, the Festival will be structured into two sections: Theatre and Film. The inauguration of a new section is very important for our school that will pass through a formation and an affirmation period. The film section has submitted attendees from the following countries: Belarus, Ukraine, Germany, Czech Republic, Slovakia, Poland, Russia, Romania, and Republic of Moldova. 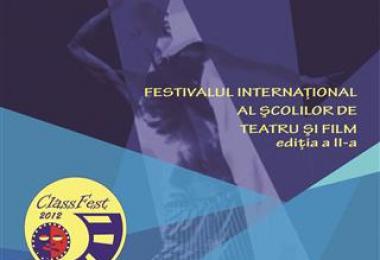