"The Dynamics of Metamorphosis", Poland

"The Dynamics of Metamorphosis" source: www.grotowski-institute.art.pl

The Grotowski Institute is seeking actors and dancers for its two-year performance research project "The Dynamics of Metamorphosis" led by Paweł Passini, Elżbieta Rojek, Przemysław Wasilkowski and the ensemble of neTTheatre (Teatr w Sieci Powiązań).

Taking Euripides’ tragedies as a starting point, they will focus on the techniques of an actor’s metamorphosis. The work will be organized into 10-day sessions to be held every two months, each session concluding with a presentation. The project will culminate in the creation of a performance piece which is set to premiere in May 2014, and the publication of a textbook including the description of the methods used, work documentation and a record of the experiences of the leaders and participants.

Selected candidates will be invited to participate in the first session to be held between May 22nd–30th 2012. During this session, a selection process will yield a final group of 12 performers. The session will be held in Na Grobli Studio at the Grotowski Institute in Wrocław.

Participation is free, but no financial support is offered for boarding and bedding.

The organizers about their project:

"The Dynamics of Metamorphosis" is a performance research project that seeks to reconstruct the repertoire of ancient actors’ skills, particularly the impersonation and transformation. In the light of our 10-year performance experience and from the perspective of working with source material, we see metamorphosis as a key concept for the understanding of phenomena in Greek theatre and its constitutive actor-chorus-spectator relationship.

Our research focuses on Euripides’ tragedies and the acting scores they contain. Analyzed in terms of the sequence in which characters enter the stage, they reveal a remarkable regularity, which we call the Three Actors Principle. The role of this principle in our perception and understanding of ancient theatre can be compared to the role of Newton’s dynamics in classical mechanics. By applying it when working with source material, and especially in performance practice, we discern an extremely intricate system of energy conservation and of keeping this energy in continuous circulation within the organism of a performance.

The perennial dilemma in staging ancient tragedies is the gap between the number of characters in a play and the number of actors. Many sources mention three actors – understood here as performers of solo parts from the script. But we know they share the stage with the chorus, and mime artists make an occasional appearance, too. The number of actors who are in dialogue with each other, however, is never more than three. Our research shows that all parts are divided among these three actors, and their configuration and sequence form an energy ladder that the actor climbs. This construction allows performers to build their roles in the tension that emerges between characters, rather than based on their own personality or in opposition to it.

This model of theatre not only sheds new light on the essence of the function of actor and theatre in the Greek education system, but creates new, extremely interesting and effective staging and teaching tools, ready to be used in twentieth-century theatre. Through in-depth practical examination of "energy flows" from which Euripides builds character sequences enacted by each of the three actors, we can better understand the essence of the presence of mask in ancient theatre. From the perspective of the Three Actors Principle, the mask doesn’t seem to be a thing that hides the "true face" of the character or actor, but – quite the contrary – a part of the system of mirrors that reveal their common source – the "dynamic of metamorphosis" governing the lives of both the characters of ancient tragedies and the performers who carry these characters on their shoulders". 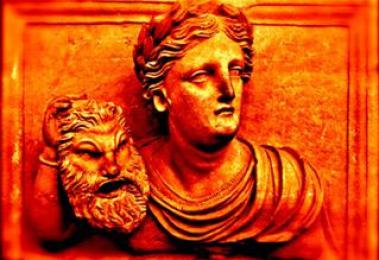 "The Dynamics of Metamorphosis", Poland