The idea of the festival is to create a room for multicultural dialogue in the East European countries. After political transgressions, theaters in former communist block countries started living separately and lost contact with each other. The DEMOLUDY Festival provides the occasion to see what the post-communism theatres are doing at the present moment and may also act as a facilitator of beneficial exchange of experience and ideas. It's also an occasion to make us realize that we're all not closed societies, but communities of people living among the ruins of a Eastern civilization.

This year's festival will be marked by a higher precense of women. They are bolder and breaking out of the "demoludy" world and cultural shadow. They show a different and often surprising view of the world.

"THE QUEEN OF COOKIES" by Bela Pinter revolves around Erika Kosár and her childhood. Domestic violence – you read about it in the papers, you see it on TV or you hear it on the radio. ‘It must be terrible’ some people think, mainly those lucky people who only hear about such things and never experience it first hand. Others, however, might feel awkward either because they have had traumatic experiences in their own childhood, or because as parents their own guilty conscience doesn’t leave them at ease. Our hero is the seven-year-old Erika. We simply must love her and encourage her! She will win.

"GAMES IN THE BACKYARD" is an Israeli play written in 1993 by Edna Mazya and is based on an infamous, true story of the rape of a young girl by a group young boys. It juxtaposes the life style and motivations of the youth living in Kibbutz Shalom, Israel in 1988, and that of the male legal system that dealt with the aftermath of this crime in the courts.

The playwright, Edna Mazya, cleverly doubles up the roles of victim and prosecutor and that of the rapists and the defence council. The relationships between the adult characters have the same gender prejudices as their teenage counterparts: comments on the prosecutor’s figure, a misunderstanding of what is meant by an offer of going somewhere for a drink – these little details nicely show the inherent presumptions of gender roles, even in a professional setting.

The victim, 14-year-old Dvori Machnes, is full of bravado in front of the group of boys she longs to impress, and for all of her talk of cigarette smoking and beer drinking, her wide-eyed excitement at the attention she receives is heart wrenching. However, her trust and naivety –which she’s about to lose – is most harrowing.

The four boys are all 17 years old but the character of Asaf is mature beyond his years and a master manipulator. He is the focus of Dvori’s attentions and he wastes no time in taking advantage of that. The opposite of Asaf’s subtle persuasion is Shmulik, whose spurned affections for Dvori undergo a metamorphosis into hatred. Joining this duo are two complicit friends, Sela and Gidi who hurry each other along in their chilling treatment of Dvori as an object for their own gratification. Mazya’s later courtroom scenes are snippets of a Kafkaesque trial, with Dvori’s failure to react in a way expected by the court compounding the effects of her horrific experience.

"TWO IN YOUR HOUSE" - Belarus. A former Soviet republic crushed between Russia and Europe. Under the totalitarian rule of President Alexander Lukashenko, prosecution of opposition activists, torture in prison and shameless propaganda in media has become an everyday  reality.

The documentary performance Two in Your House is based on a real story. In the violent post-election crackdown on opposition, the Belarusian KGB has placed poet and opposition politician Vladimir Neklyaev under house arrest, where he was kept under constant surveillance by security agents.

The performance focuses on the house arrest that lasted several months. The breach of private space, turning a home into a prison and constant surveillance by KGB officers was what interested the artists from Teatr.doc the most. As time passes, the situation becomes more and more dramatic; the tension in the apartment is rising. The playwrights carried out a number of interviews in Belarus, on which they have based their script.

Teatr.doc is an independent theatre from Moscow which has been founded in 2001 by playwrights of the young generation. Teatr.doc focuses on documentary theatre, resolving to make socially relevant theatre, a theatre talking about current, actual issues that, according to them, call for artistic reworking. “The goal of Teatr.doc is to provide an objective image of reality”. To this goal they are still true; doing their best to give a voice to the people they meet.

"CHAOS" - The Russian-born director Yana Ross studied in the USA and finally settled in Lithuania. Her powerful and original interpretation of Mika Myllyaho’s play Chaos is a study of today’s individuals who seem to have everything under control. In reality, they are only a step away from a total breakdown.

The compelling acting work, well-fitted and elegant staging; as well as boldly visual and psychologically convincing direction depict a portrait of us and our era.

"PRESIDENTS (FIRST LADIES)" - Three women looking for hypothetical happiness, confront their speech and their fantasies in order to forget their hollow existence. Through the portrait of these grotesque, troubling but no less sensitive women, Werner Schwab, in a language which is ferocious, exacting and droll, denounces "right-mindedness" and a tidy life made up of rules and regulations in which you have to portray nice people in films so that people become nicer.

Three worn women sit round a kitchen table talking sausages, sex and excrement in a drunken evening that takes an unexpected turn. Erna is a former cleaner with an unruly son and some strict moral values; Greta’s husband has run off with another woman and she now takes comfort in her blonde curls and thick make-up; and Marie prides herself on her dexterity in the art of toilet cleaning. As the three women vie for eternal salvation, they begin to imagine alternative futures. Greta’s fate is to be fondled by the musician who later asks her hand in marriage, the butcher entrusts his stock of meat to Erna’s cautious hands, and the priest rewards Marie’s dexterity with some wacky water-closet surprises. First Ladies is a once in a lifetime, glorious and gruesome theatrical treasure.

"ALEXANDRA. A THING ABOUT PIŁSUDSKI" - The tale revolves around the second wife of Marshall Józef Piłsudski, Aleksandra, nee Szczerbińska. She is portrayed not only as the wife of the most important politician of the inter-war period, but also a woman with a revolutionary past, who did not shun violence. After she married Piłsudski, she remained involved in social and political undertakings. She was known as an advocate of women in the military and women’s suffrage. She also strove to be an exemplary housewife and a mother of two daughters.

The image of Aleksandra is a distorted Littre – in the background is music by contemporary female punk bands (or refined harpsichord music), but the text is full of colloquial speeches mixed with lofty ideals. On the one hand, it is an ironic portrayal of a rebel girl, on the other, it asks the eternal question about the use of violence and the myth of revolution, which every Pole finds so appealing. An uprising, a rebellion, exile and war. Which of these can be taken up by a woman fighting for change, but also for her own life? What do you really want to change when you blow up railroad tracks under a train?

Later scenes show the birth of the daughters and the stratification of the public sphere (political activities) and the private sphere (the home, labour which keeps the character from attending a rally, the eternal choice between being an active woman and a carer at the same time). The theme of choice in the context of motherhood is not explored by culture because it is too closely associated with duty and the woman’s vocation as a mother. On the other hand, Aleksandra, as a headstrong feminist, still wants to determine her own empowerment. The figure of Marshall Piłsudski is very important throughout the play – at first he appears like Superman, and then changes slowly into the Legendary Man with a Moustache. With all the legendary ballast, and the attributes of Polishness – a chestnut horse, a sabre and medals. But are they helpful when it comes to cleaning and taking care of children? Later scenes focus on the legacy received from Aleksandra Piłsudska by her daughter and granddaughter. This is the springboard for a story about the roles of women, their place in history and culture, and about their role next to men, husbands, both in the historical and the individual context. The show is planned as a contemporary melodrama, making a reference to the tradition of the genre, but also using the tools of modern language of the theatre, which should help to emancipate the genre. 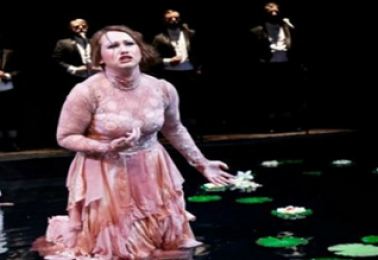