Born in 1963 in Bucharest, Romania, Danielagraduated from Bucharest University where she studied Romanian, English and American literature, linguistics, pedagogy, and folklore. Her thesis concerned Ion Creanga, a classic 19th century Romanian writer , and focused on  how his literature made best ludic use of folkloric clichés in a theatrical way.

After four years of teaching children and adolescents in a rural area during Ceausescu’s regime, she decided to begin a new career in theatre. In 1990, she started out as a dramaturge and tour operator for a famous Bucharest theatre company renown for its innovative and challenging productions: Teatrul Lucia Sturdza Bulandra. During this time she published theatre reviews in “Romania Libera”, a Romanian newspaper.

As a translator, she has translated English and American books on History and Contemporary Politics for the All Publishing House, as well as theatre plays: "the Brothers Karamazov" by Stephen Crane, commissioned by Teatrul National Craiova, and books for children - "Meg and Mog Show" by David Wood, produced by Teatrul Ion Creanga in Bucharest, as well as a children’s fantasy book , "Maria Dracula" by Alice Rose.

In 1997, she became the mother of a baby son, who inspired her to start writing children’s stories, which were later commissioned and broadcast by the national Radio Society for four years.

Daniela Miscov believes that children need art, theatre and education of high quality. Exposing children to arts and providing them with education has been the centre of her work ever since she started out.

She is passionate about art, communication, networking, and learning. She has theatre friends all over the world and takes pride in this fact, as she strongly believes in maintaining international friendship and connections.

Beginning with 1994, she moved to work for Teatrul Ion Creanga, the biggest professional theatre company for children in Romania. Here, she got employed as a dramaturge, tour operator and project coordinator. Until 2011, she was a regular contributor to the foundation of the "100, 1 000, 1 000 000 Stories" International Theatre Festival for Children, where she worked as Manager of International Relations.

While at the Teatrul Ion Creanga, she devised diverse projects and coordinated the activities of its early age programme, on the basis of which the company was invited to partner the European Small size, a big citizens’ network and project, whose main aim is to promote early age performing arts and education.

Starting from 2003, she has been an enthusiastic promoter of Epicentre, a regional theatre centre based in Zagreb. During 2007-2011, she held the position of Secretary General at ASSITEJ Romania. Another exciting theatre experience came when she became the artistic director of two early age shows, White and Black in 2010, and Wardrobe with Dreams in 2011.

Beginning with March 2012, she has become a freelance cultural manager, storyteller, workshop leader and artistic director, busily preparing the set-up of an association for devising experimental art and theatre projects for children, Artelier D, Proiecte pentru copii, in kindergartens, schools and unconventional venues. In cooperation with local, national and international institutions, she also plans to initiate workshop trainings for artists and educators working with children and carry outinterdisciplinary projects in the fields of fine arts-theatre-storytelling, parenting as well as creativity courses. 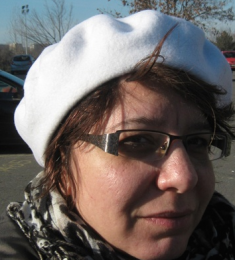