Professional stage career: (Henryk Tomaszewski’s Wroclaw Pantomime Theatre 1987-1990; Wojciech Misiuro’s Expression Theatre 1990-1992). He graduated from the Department of Philosophy and History, of the University of Wrocław in 1990.

In 1993, he founded the Dada von Bzdülöw Theatre, where he still works as its director, choreographer, dancer, and performer in most of its productions. He has performed at numerous festivals in Poland and Europe, as well as India, USA, Israel, and Palestine.

For his artistic achievements, he has been awarded by the Mayor of Gdańsk (1998), the Mayor of Gdynia (1999), the Minister of National Education (1999), the Marshal of the Pomorskie Voivodeship (2006), Theatre Pasta International Theatre Awards - India (2007). In 2010, he was decorated the medal: "Meritorious for Polish Culture" by the Minister of Culture and National Heritage. The City Council of Gdańsk and the Office of the Marshal of the Pomorskie Voivodeship frequently provide him with art grants.

As a choreographer and stage movement director, he has co-operated with a number of theatres in Poland. The drama performances he has recently directed include: "Cyrano de Bergerac", at Modrzejewska’s Theatre in Legnica, and "Green Zoo", at the OCH Theatre in Warsaw.

Between 1997-2000, , he supervised a series of artistic events titled "A Day of Beautiful Society” at The Witold Gombrowicz City Theatre . Between 2002-2007, he coordinated the artistic programme of Gdańsk Dance Corporation Festival. Since 1990, he has given theatre workshops and dance classes in Poland atThe State Ballet School in Gdańsk, the School of Acting and Singing at the Musical Theatre in Gdynia, The Theatre Academy in Warsaw, and abroad: the Czech Republic, England, France, Finland, Germany, Scotland, Sweden, Ukraine, USA, Zimbabwe. 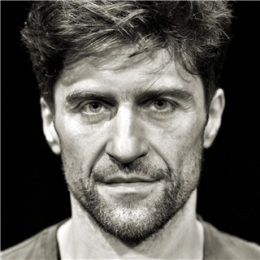