OKSANA DUDKO (PhD), theatre curator and historian based in Lviv, Ukraine. Founder and long-time head of the independent theatre organisation Art Workshop Drabyna. She initiated and lead the International Theatre Festival “Drabyna”, and (between 2010 and 2014) the International Festival of Contemporary Dramaturgy “Drama.UA”. Co-founder and curator of the programme for the First Scene of New Dramaturgy Drama.UA.

She works at the Centre for Urban History of East Central Europe. Her recent research projects focus on history of the theatre and theatrical management, rituals and practices of public events (celebrations, commemorations, etc.), and the First World War. In the late 2015 she co-founded the independent organization Centre for Theatre Research and Education  in Lviv. The first project of the Centre, dedicated to the actors and the history of their profession and their role in the society in the years of soviet past and in the independent Ukraine, is realized in cooperation with EEPAP as a artistic-curatorial residency in the frame of EEPAP Residency Programme.

Oksana has cooperated with EEPAP since the very beginning, as an expert, participant of EEPAP meetings, and co-organizer of numerous EEPAP projects and events in Ukraine. She is an initiator and co-organizer of the “Former East = Future West?” EEPAP working meeting in Lviv (2013), co-curator of dramaturgical workshops: “The City as a Pre-text” and “School of Critics” – during  the Fourth Drama.UA International Festival of Contemporary Dramaturgy in Lviv (2013), co-organiser of the DESANT program in Lviv (2013-2015), coordinator of the “Why think?” EEPAP Theatre Laboratory (2014), and an author of articles for “The Platform” EEPAP dictionary of performing arts. 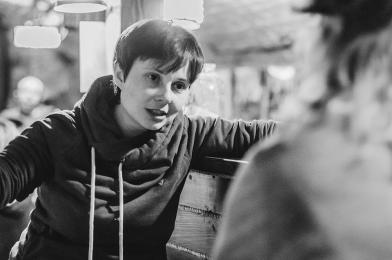