The 4th session of International Theatre Laboratory in Lublin “Pressure-oppression-emancipation” was held during the Theatre Confrontations Festival in Lublin on October 9-19. The participants were theatre directors, playwrights, curators and theatre researchers from Ukraine. The Laboratory focused on the performative strategies of defining and problematizing oppressive moral, political and aesthetic systems; on emancipation projects characteristic of specific cultural spaces; on the role of censorship and auto-censorship in art.

The session was organised as a seminar. Its participants watched and discussed the festival performances, wrote the critical reviews, took part in workshops, disscussions and lectures given exclusively for the participants of the Laboratory by the invited quests: Goran Injac (artistic director of Mladinsko Theatre, Lyublyana), Holly Hughes (performer, professor at University of Michigan), Joanna Krakowska (theatre historian and researcher, Polish Academy of Science) and, simultaneously, continued working on their projects.

In accordance with the rule of self-education, part of the lectures and discussions related to the topic of gender and queer theory were led by the participants themselves. We also worked on the strategy of development of the Laboratory. One day was dedicated to the evaluation meeting led by the representatives of Adam Mickiewicz Institute.

The session in Lublin also featured presentations of work-in-progress by the participants. The performance “Opolchenec” (“Separatist”) created by the director Anton Romanov, playwrights Den and Jana Hummenyi, and actress Galina Dzikayeva was presented in the Centre of Culture in Lublin.

The 4th session of the Laboratory was organised as part of the DESANT educational project which has been carried out by the East European Performing Arts Platform (EEPAP) since 2012 under the curatorship of Joanna Wichowska. Desant is addressed at artists, critics and theoreticians of performing arts in the Eastern Partnership countries. The DESANT activities are rooted in local reality and related to a specific socio-political context; they combine workshop elements with theoretical reflection and are created in close cooperation with partner organisations. 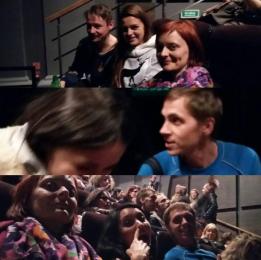