The fifth session of the International Theatre Laboratory took place in Pryluky and Kachanivka (Chernihivska oblast) between 26 November and 3 December 2015. It was organised in cooperation with the Art-TEMA Creative Association (ГО "Творче об'єднання "Art-ТЕМА"), an independent organisation headed by Artemiy Anischchenko, theatre director, participant of the Laboratory, and the head of the Municipal Centre for Culture in Pryluky. The session concluded the two-year work of the Laboratory’s participant. The meeting focused on the idea of repetition in its cultural, artistic, philosophical, sociopolitical aspects, as well as its manifestations in performing arts.

The aim of the work at the Pryluky Laboratory, conducted by Marcin Cecko and Joanna Wichowska, was to create a specific theatre event concerning the experiences of the Laboratory’s participants, both as artists and as citizens functioning in a specific cultural and political context. The materials and experiences accumulated and formed during the four previous sessions of the Laboratory, as well as the workshops, and lectures concerning the notion of repetition, formed the foundations of the work. The public performance summing up the two years of the Laboratory’s work took place on the stage of the Centre for Culture in Pryluky on 2 December. The work took the form of a performative dialogue with the audience. The authors wrote the texts they wrote during the session, presented their theatre manifestos (created in groups and recorded) and reenacted them. The form of the performance was open so that it can be repeated in diverse contexts, spaces, and casts.

The participants of the Laboratory also worked on their own projects, both individually and in director – dramaturge teams, and developed a strategy of cooperation for the future. A workshop on planning the activities of independent creative organisations was conducted by Mykola Homanyuk. Asia Senina, cultural studies scholar and art curator from Kharkiv, gave the lecture “Why the esthetic is political (according to Jacques Ranciere and others).

In Pryluky, the participants scheduled the subsequent meeting of the Laboratory, to be held independently of EEPAP in Połtawa in January 2016. The meeting will be organised by the Połtawa Theatre Laboratory, run by the playwright Iryna Garets, a participant of the EEPAP Laboratory.

The 5th session of the Laboratory was organised as part of the DESANT educational project which has been carried out by the East European Performing Arts Platform (EEPAP) since 2012 under the curatorship of Joanna Wichowska.  DESANT is addressed at artists, critics and theoreticians of performing arts in the Eastern Partnership countries. The DESANT activities are rooted in local reality and related to a specific socio-political context; they combine workshop elements with theoretical reflection and are created in close cooperation with partner organisations. 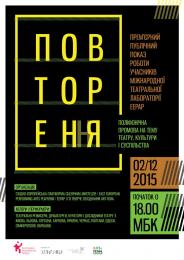