We are pleased to announce that the first event of EEPAP’s educational project "Desant" has been completed.

Additionally, Joanna Wichowska presented the recent EEPAP activities. The students of the Summer School received certificates of participation issued by EEPAP and the Les Kurbas Centre.

For more information about the Kiev Summer School, please read the text by Borka Paviciević ("Studenti u Kijevu") published in her weekly column in the Serbian newspaper "Danas".

For more information about Centre for Cultural Decontamination and its activities, please read the interview with Borka Pavićević at Dwutygodnik.com.

The School for Theatre Curators went on for two weeks and was led by the Ukrainian experts and EEPAP guests. Among the participants there were young theatre curators, researchers, practitioners from Kyiv and other cities.

In the autumn (October 23rd - 26th) "Desant" will move to Minsk, Belarus, where it in cooperation with Visual And Performing Arts Centre "Art Corporation"  will hold a series of workshops for dramaturges and set- and light-designers. The workshops will be held by the dramaturge, playwright and director of the City Theatre in Wałbrzych Sebastian Majewski ("Text in theatre"), and the set and light designer Justyna Łagowska ("Light the performance. Researching the medium"). The workshops in Minsk are co-organized by Adam Mickiewicz Institute.

The Desant educational project is addressed at curators, managers, critics and theoreticians, as well as artists: directors, playwrights, dramaturges, actors, dancers, choreographers, stage designers working in Eastern Partnership countries. Its aim is to support bold, innovative initiatives and projects, enhancing the competence of artists, critics, and audiences, deepening the knowledge on those theories and practices in performing arts which construct culture not as a commodity to be consumed but an instrument to be utilised in a conversation about the present.

The aim of the Desant educational project is to support bold, innovative initiatives and projects, enhancing the competence of artists, critics, and audiences, deepening the knowledge on those theories and practices in performing arts which construct culture not as a commodity to be consumed but an instrument to be utilised in a conversation about the present.

The organising principles behind Desant activities are rootedness in the local reality; reference to a specific socio-political context; combining practical activities with a cultural and sociological reflection. Apart from practical actions (thematic workshops, staging a production, writing texts), we include elements of theory-based activities (lectures, film and stage production screenings, debates). We try to connect diverse environments, motifs, as well as creative and research strategies, in this way releasing theatre from the “high art" niche in which it was locked by the tradition of state-run academic theatres, still dominant in Eastern Partnership countries.

The programme of Desant is created in close cooperation with our partner organisations as well as cultural activists and artists from the countries where the activities take place. The curators of Desant are not interested in a one-way export of knowledge and specific (“good”) practice. What they care about is exchanging experiences, infecting each other with ideas, working together. They do not want to measure the effectiveness of this joint work by means of an instant product.

More images from this session can be found here. 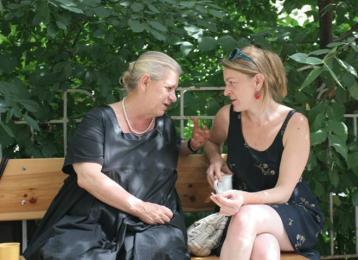