DESANT has been carried out by the East European Performing Arts Platform (EEPAP) since 2012 and is addressed at artists, critics and theoreticians of performing arts in the Eastern Partnership countries. The DESANT activities are rooted in local reality and related to a specific socio-political context; they combine workshop elements with theoretical reflection and are created in close cooperation with partner organisations.

The Polish artists taught a series of workshops and lectures on strategies of work with documentary material in theatre, visual arts and film. They presented contemporary methods of documentary film narration (Magdalena Mosiewicz), applications of documentary material in theatre work (Wojtek Faruga), and forms of documentary theatre based on a play between reproducing reality and fiction (Joanna Wichowska).
The aim of the workshops was to combine artistic work in the strict sense with a reflection over society and the specific local reality. In accordance with earlier decisions, the workshops were geared towards creating a blitz-performance concerning the dramaturgy of the everyday. This was also the leitmotif of the Terra Futura festival.

Theatre work, focusing on one day from the past (3 November 2012, a year before the premiere of the performance), was based on the materials collected and edited by local participants (interviews with residents of Kherson) and research carried out during the workshop. The participants worked on the dramaturgical adaptation of selected motifs and materials gathered, they wrote texts, analysed the events to be represented in the production as well as their context, and made film recordings.

The blitz-performance made in this way was a formal hybrid, an event at the intersection of performative reading and a series of playlets with multimedia elements.

The premiere of the production, entitled “A day when nothing happened”, presented as part of Terra Futura festival, attracted an audience of about 150 persons. Accounts of the work on the production were published in local and national media, such as “Reporter” (http://reporter.vesti.ua/25238-predjavite-vashi-dokumenty), www.souc.org, and Kherson newspapers.
The events of Terra Futura also included the screening of “I Still Believe”, a film directed by Magdalena Mosiewicz, and a Q and A session with the director, as well as a meeting with students and teachers of Kherson University, entitled “Ukraine’s theatrical eurointegration”.

The aim of the Desant (Landing) educational project is to support bold, innovative initiatives and projects, enhancing the competence of artists, critics, and audiences, deepening the knowledge on those theories and practices in performing arts which construct culture not as a commodity to be consumed but an instrument to be utilised in a conversation about the present.

The organising principles behind Desant activities are rootedness in the local reality; reference to a specific socio-political context; combining practical activities with a cultural and sociological reflection. Apart from practical actions (thematic workshops, staging a production, writing texts), we include elements of theory-based activities (lectures, film and stage production screenings, debates). We try to connect diverse environments, motifs, as well as creative and research strategies, in this way releasing theatre from the “high art" niche in which it was locked by the tradition of state-run academic theatres, still dominant in Eastern Partnership countries.

The programme of Desant is created in close cooperation with our partner organisations as well as cultural activists and artists from the countries where the activities take place. The curators of Desant are not interested in a one-way export of knowledge and specific (“good”) practice. What they care about is exchanging experiences, infecting each other with ideas, working together. They do not want to measure the effectiveness of this joint work by means of an instant product.

An extract from the "Reporter" article is attached in the .doc file at the bottom of the page.

Images from the session can be found here. 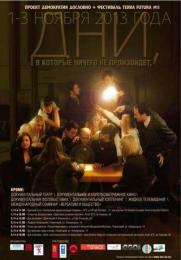