To apply to the workshops please contact: [email protected]

The deadline for application is June 4th 2012.

These workshops are open to both up-and-coming and experienced practitioners, and to independent artists and students. The programme has invited Bacaci Sjenki/ Shadow Casters (Croatia) and Geraldine Pilgrim (UK) to run two intensive workshops (10.00 – 18.00  daily) from 2nd - 13th July 2012. Each workshop will culminate in a final production that will be presented as a part of the Festival program.

The workshops are open to up to 12 participants and costs 150 € individually. The Festival offers 12 bursaries only for artist residents in the province of Trento. The deadline for application is June 4th 2012.

Reality, in Sloterdijk’s sense, the essence of reality which we have lost, is mediated through this workshop. The workshop is a hunt for reality, a search for details of reality, of smells and sights. A search for something the contemporary spectator may believe in or believes to be true. Not a fact to believe in, but the principles of believing. The city (or a particular space within the city) as a hypertextual creation by definition is a perfect stage and rehearsal space for this journey.

Participants will have the opportunity to explore:

Bacaci Sjenki/ Shadow Casters is a non-profit international artistic production platform dedicated to interdisciplinary collaboration, creation, and reflection within the field of intermedia arts, especially in the domain of its implementation in urban spaces.

It was co-founded by Boris Bakal and Katarina Pejovic with its seat in Zagreb. Through its activities that encompass a broad range of projects – multimedia performances, cultural memory projects, urban-human networks, educational projects, workshops, lectures, conferences, urban performances, installations and exhibitions - SC continuously instigate intercultural dialogue and an active exchange between Croatian and international artists and professionals, at once questioning the existing concepts of individual and collective identity.

A 10 day site- specific workshop involving the research of and the practical application of a given theme; culminating in  showings of site- specific performance/installations in selected sites within the grounds and interior of the Ex Mental Hospital of Pergine, now site of Pergine Festival. Participants will work both individually and collaboratively and will examine ways of looking at performance and space and explore devising work through creating their own atmospheres and environments. This workshop is open for students, and both up-and-coming and established practitioners.

Participants will have the opportunity to explore:

Geraldine Pilgrim. She trained as a fine artist and theatre designer, co- founded and became Artistic Director of Hesitate and Demonstrate - the influential visual theatre company which toured Britain and the mainland in Europe and has since been making installations, theatre based performances and large scale site-specific events. Her particular field of work is centred around installations and performances in unusual buildings and landscapes where the architecture of the site is used as inspiration and narrative, gradually revealing memories and atmospheres that have built up over the years, both together with the story – both imagined and real - of the space.

She is also an Artsadmin Artist, an Honorary Associate of the National Review of Live Art and a visiting lecturer at Wimbledon College of Art, Goldsmiths College, Central St Martins and L.A.M.D.A. 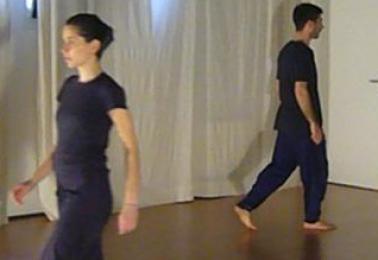