European Festivals Association brings together 35 participants and 9 presenters from all over the world.

The Atelier for Young Festival Managers – initiated by the European Festivals Association (EFA) – will take place in Ljubljana, Slovenia from the 14th to the 21st of October 2012. Hosted by the Ljubljana Festival, the fifth Atelier will bring together two generations of festival managers; 35 talented young festival managers from 14 countries and 9 renowned festival directors from all over the world will exchange their experiences and visions during 2012 Atelier. The participants will join the Atelier alumni network of 140 festival leaders from 38 different countries.

Inspired by the motto coined by Bernard Faivre d’Arcier "The true role of a festival is to help artists to dare, to engage in new projects…", the Atelier for Young Festival Managers focuses on the artistic aspects of festival management. "The Atelier is about formulating experiences and passing on knowledge to a next generation of festival makers: knowledge about programming a festival, thematically focusing on the very essence of arts festivals - the art and the artist," explains Atelier Coordinator Hugo De Greef, former EFA Secretary General, General Manager Bruges European Capital of Culture 2002, Founder and former Director Kaaitheater.

"The opportunity offered to participants to engage with festival managers and artists of such international reputation makes the Atelier a unique stage to explore creative ideas and develop new perspectives. I am glad to invite this group of people to Ljubljana at the occasion of the 60th anniversary of the Ljubljana Festival and of EFA," underlines Darko Brlek, EFA President and General and Artistic Director of the Ljubljana Festival.

The public Opening Ceremony takes place on October 14th 2012 at 5.30pm at the Ljubljana Castle. Atelier presenter Robyn Archer will give the keynote speech to set the tone for a week of intense discussions, inspiring presentations and decisive encounters which might shape the careers of the Atelier participants as art professionals. The Atelier LJUBLJANA 2012 will be concluded with a public session on October 20th with a keynote speech by Gerard Mortier, and the launch of the 5th volume of the EFA Books series entitled "Inside/Insight Festivals. 9 Festival Directors – 9 Stories".

Latest news and more information on presenters and participants can be found at: www.atelierforyoungfestivalmanagers.eu 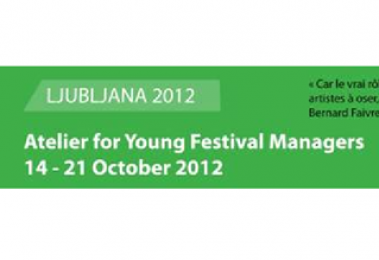