A callout for true stories from "austerity Europe"

Made in collaboration with the Making Tracks project and   Nottingham Playhouse  UK, "All Across Europe" is a theatrical response to the cuts and austerity programmes in Europe in the years 2010 to 2014.

This production is planned as a site-specific work that will try to capture the sweep of our experience of this unique era of European depression, presenting its intimate, untold and little known stories, as well as attempting to chronicle and express its wider impact on our human interactions and relationships.

The piece will be developed in the UK over the summer and autumn of 2013 and is contingent on the generous participation of individuals, activists, optimists, protestors, journalists, artists, writers and collectives/communities from across Europe, who are invited and urged to share their true stories and accounts of this unique period (see below).

The piece is being initially created for the NEAT Festival (Nottingham European Arts & Theatre Festival) planned for summer 2014 (at the time of writing subject to final confirmation). It will be created and performed by a company of professional artists.

In a spirit that reflects these times and to create an open channel for uncensored responses contributors are first invited to send a personal testimony to the project’s email account <[email protected]>  in confidence, or even anonymously if you wish to use a pseudonymous email account. The deadline for contributions is 13th of  May 2013.

Anyone can contribute a written statement or first person account. There are no requirements at all regarding the form or length of contributions.

In particular it would be fantastic to hear from: 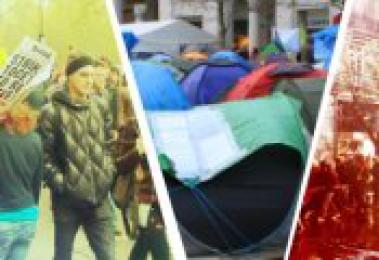