A new project of Oliver Frljic based on a controversial late familiy farce On purge bébé (Going to Pot).

Frljic explains the project as follows: "By staging this text in Mladinsko I'm trying to accomplish several things. First, I'd like to change the prevalent and superficial perception of my work. In this project I problematise the expected methods of representation, by staging a play by an author for whom theatre was in the first place a vehicle for entertainment. But in this questioning of the representation method, or, to be more precise, in the part of the performance that is happening in the backstage, the space for the subjectivisation of an actor is beginning to open. The actors waiting for their cue to enter stage sit behind scenery, in front of another audience and try to actively structure this time".

Oliver Frljic radically deals with love and hate for theatre in the performance.

Possibly one of  Pasolini's most intimate works that develops alongside with the memories of the wonderful town of Idrija, where the author lived when he was nine, Amado mio is a story of love.

The play won a prize for the extraordinary expressivity in the border areas between the theatre and other arts, or creativity in the widest sense ,at the 39th International Festival on New Theatre INFANT in Novi Sad, Serbia. The jury wrote: "The play ‘Re-de-construction: Class Enemy’ moves the borders of the spectacle to the authenticity of the experienced, both on the conscious and the unconscious level, thus producing a creative aggressiveness which attacks all the spectator’s senses. "Class Enemy" poses the question of when exactly the theatre stops to be the theatre and becomes life by a very distinctive treatment of the performer’s space and elements within it".

Vito Taufer looks into the phenomenon of luck and happiness, which was on the rise in the 1990s in different fields of science.

The intimate triangle takes place in the villas of Roman aristocracy where the decor is thoughtfully chosen, in the sensual atmosphere of Italian country palaces, where Visconti’s heroes in luxurious costumes, in their haughty distance from their own emotional worlds, seem to be frozen in time. 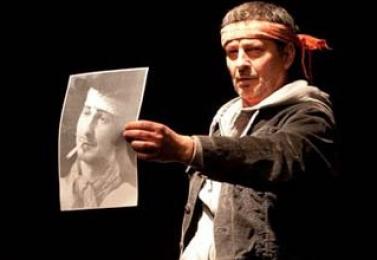