Aerowaves Spring Forward provides a platform for the most vibrant and promising choreographers to show their work to performing arts professionals and local audiences. The festival is Live Streamed to reach dance fans across the world.

The festival began in 2011 as an experiment. It took shape in response to the uncertain economic climate and the realities facing emerging dance artists as they begin their careers. Spring Forward provides a context for young choreographers to present their work within a different cultural setting and to new audiences. The platform supports artists as they seek new collaborators for their work and fosters a friendly atmosphere within an intensive weekend festival.

As with all Aerowaves initiatives, Spring Forward has grown from a place of generosity and a desire to make connections. The first festival in 2011 was held in partnership with En Knap at Španski Borci in Ljubljana, Slovenia. In 2012, Operaestate Festival Veneto dedicated its entire B-Motion strand to showcasing Aerowaves' work for the second Spring Forward festival.

Armed with confidence in our new venture, we took the festival to Switzerland in 2013 to join the inaugural programme of Zürich tanzt. Umeå, the European Capital of Culture in 2014, hosted the fourth Spring Forward at Norrlandsoperan, and in 2015 we were welcomed by the Mercat de les Flors in Barcelona.

The programme is usually formed of at least ten of the current year's Aerowaves Twenty artists, plus some previous Aerowaves Twenty artists who are brought back to the festival by popular demand – this is the Aerowaves Encore strand. Depending on the city we visit each year, some local artists may also be presented. All artists stay for the whole weekend, so that conversations with programmers can evolve naturally.

Local audiences have the chance to discover a great variety of brand new dance artists, most of whom are performing in their city for the first time. Since 2014, we have Live Streamed Spring Forward so that dance fans across Europe and beyond can watch and engage with the festival. 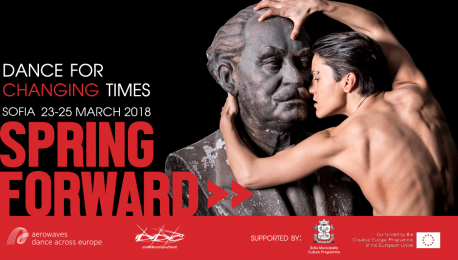 Cannot be with us at Spring Forward in Sofia? Don’t worry we’ll be streaming all the action live online via Facebook Live and Spring Forward website from Friday 23rd to Sunday 25th March.

Showcasing some of the best and brightest emerging choreographers in Europe, the Spring Forward live stream is jam-packed with quality dance performances, behind the scenes interviews and lively dance debates animated by our Spring Forward TV hosts Andreas Elia Constantinou and Stephanie Handjiiska. Send us your thoughts and questions on the shows on Facebook as we'll be reading out as many reactions as possible!