A dance stage turned into a gym? Or the parquet in a disco? Or a fashion show catwalk?

Modern dance more and more often occurs in an intermediary sphere: between the conventions of art and the spaces of ordinary behaviour. Choreographers and visual arts artists are looking ever closer at that which is under their noses – how we move on the street, in clubs, while jogging, at social gatherings and even during sex. And they’re making it their subject. Of course, their practice would be hard to imagine (and hard to comprehend, to say the least), if earlier in the mid-60s the creators of post-modern dance hadn’t decided that dance could be anything – even typical walking or running. Today, we’re still coming to terms with the consequences of that discovery: not only do we see onstage the simplest daily  gestures, but we also frequently view amateur dancers almost as the direct inheritors of the classics of post modern dance. A woman dancing alone at a bus stop? A man dancing on the treadmill in a gym? It’s almost conceptual dance. Online we can find videos of similar events and enjoy them, as if we’d discovered some new, wonderful artists.

Before our very eyes, dance is becoming more and more democratic. Everybody dances – amateurs, stars, celebrities. Those who in the common understanding “know” how to do it, and those who aren’t entirely successful. What’s more, everyone’s copying one another, and so we’re becoming more and more aware that the patterns suggested to us by the mass culture of movement are subtly, but effectively disciplining us. Dance liberates us, but also subordinates. Observing the process of the democratisation of dance today, we have to notice its flip side: among other things, the achievements of all these artists in whose work dance is not so much a promise of unrestricted expression, as a metaphor of social conditioning.

The Let’s Dance project is an attempt at describing that tension. Fragments of the most important pieces of dance theatre in recent years are juxtaposed here with the works of renowned visual artists, with music videos in which dance plays a leading role, with amateur films found on the Internet. Viewers are prompted to react by specially prepared installations – to even more clearly make them aware that their movements also deserve to be called dance. The starting point is provided by important pieces from the Grażyna Kulczyk Collection, above all the installation which hasn’t been shown in Poland before, by Dan Flavin, one of the most renowned American minimalists and a highly important reference point for post modern dance. It was Flavin who was one of the first to argue that more important than the art objects is the movement they generate - a sort of dance of the viewers around them.

The place where Let’s Dance is staged is no accident. The Art Stations Foundation by Grażyna Kulczyk is a unique institution within which, for years, dance and visual arts have coexisted. It’s an ideal place for a project where the borders between these two areas of art become hard to spot, in fact invisible. 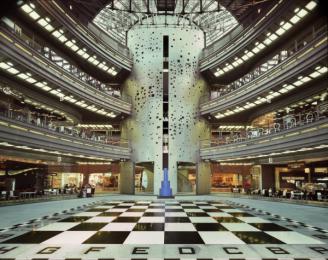