Faculty of Foreign Languages and Literature

With more than half of the global population living in towns and cities, urban development has become an ever more important issue. The socio-economical and architectural changes modern cities undergo often generate the citizens’ need to take part in the processes which shape their urban environments. Not surprisingly, many of the recent protest movements, e.g. in Istanbul and Hamburg 2013, sparked off by controversial construction projects.

Starting from Henri Lefebvre’s seminal work The Right to the City(1968), we shall discuss different approaches on urban and public space. Leading questions are: What makes a space public? What is community? How does contemporary art reflect and intervene in public space? Besides debating fundamental texts on these topics, we shall explore the urban space in Chisinau, have a look at urban movements in other cities and get familiar with practices of artistic appropriation.

The seminar is open to students of all faculties and will be held in English and Romanian. It is organised and conducted by Christian Rabl, German Lecturer at Moldova State University, in collaboration with Vitalie Sprinceana (Oberliht Association).

March 10, 2015, 6 pm
The modern city: from estrangement to guerrilla gardening?
As early as at the beginning of the 20th century, city life has been described in terms of heightened individualism, anonymity, estrangement and an ensuing longing for simplicity, nature and community. Nowadays, such diverse activities as urban farming, clothing swaps or car sharing seem to manifest a rekindled interest in shaping alternative ways of living together in urban space. In this first session of the seminar, we shall read short literary texts and discuss different notions of city life with a particular focus on the discursive relationship between nature and the city.

You can find additional materials on the Public Space in Post-socialims group. 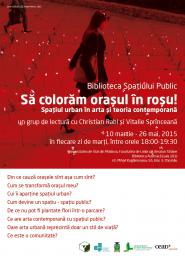