NEW: Calls for applications for SpaceLab 2015 have been released!

The main goal of the project is to initiate the international experiential interaction and personal exchange between theatre and visual academies, and to create the specific educational platform as a part of the Prague Quadrennial which will be held June 18th – 28th, 2015.

SpaceLab in Prague will provide world class workshops for more than 1 500 participants focusing on interdisciplinary experimentation across the fields of visual and performing arts, bringing new ideas, discourses, methods and technologies. All of the workshops will take place in the heart of Prague at the Theatre Academy of Performing Arts (DAMU) and will relate to the main concept of the PQ 2015 - exploring theatre as shared space and scenography as complex performative environment and its relationship to music, weather and politics.  These themes will also frame all performances and installations that will students bring from around the world to present in the public space in the Prague centre and in the DISK Theatre at the Theatre Academy of Performing Arts (DAMU) as a part of the SpaceLab 2015 programme.
The other possibility to treat the public space will students have within the Tribes project that will exhibit groups of live people in Prague streets.

All international workshops, symposia and other activities for students within the SpaceLab project are organized by the Prague Quadrennial in cooperation with the HKU Theatre, University of the Arts, Utrecht; Theatre Faculty of the Academy of Performing Arts in Prague (DAMU); The Royal Central School of Speech and Drama with the Norwegian Theatre Academy/Østfold University College and School of Visual Theatre Jerusalem. 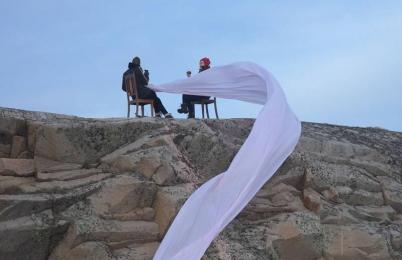