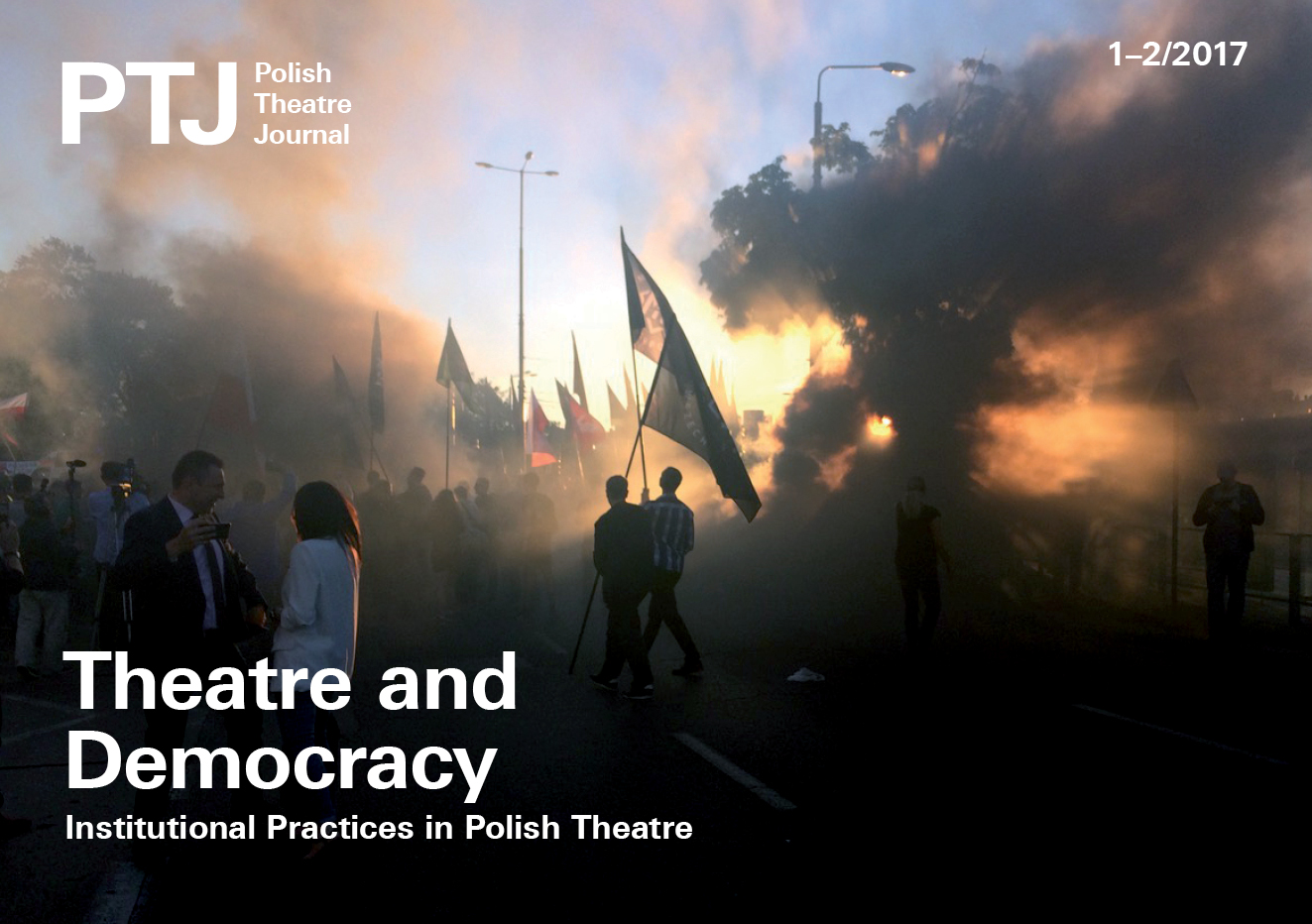 Demonstration at the Powszechny Theatre in Warsaw against The Curse, directed by Oliver Frljić, 19 May 2017. Photo credit: Marta Keil.

Polish Theatre Journal (PTJ) is an online English-language research journal examining contemporary Polish theatre and performance, which is published twice a year by the Zbigniew Raszewski Theatre Institute in Warsaw and the Department of Theatre Studies at the Aleksander Zelwerowicz National Academy of Dramatic Art in Warsaw.

From the introduction to the issue:

Culture is definitely one area of constantly escalating political conflict in Poland. It may even be that the conflict's true nature reveals itself here. The present project of national culture, reinforced by the government, has been designed to some extent as the eradication of public – or civic – culture in its many fundamental functions and essential features, including the programmatic autonomy of institutions and freedom from all forms of censorships, while fostering civil society and wide inclusiveness. According to unambiguous declarations by the current government, the role of national culture is to build an essential identity drawn from a narrative about the exceptional fate of a nation struggling against totalitarianism, which must lead to the turning of Polish society away from challenges of the globalized world deep in crisis, and towards a nationalistic isolationism.

That dynamic, dramatic process sets the perspective from which we look in this issue of PTJ at institutional practices in Polish theatre and in Polish performing arts, asking about the kind of institutions we need – especially in such times of grave crisis – and whether the current institutional model of the arts can efficiently contribute to the democratization of public life.

You can read Theatre and Democracy: Institutional Practices in Polish Theatre here.

THE CURSE: WHO DOES PUBLIC THEATRE BELONG TO?

Polish Theatre after Klątwa: Paweł Łysak and Paweł Sztarbowski, directors of the Powszechny Theatre in Warsaw, in Conversation with Agata Adamiecka-Sitek and Marta Keil

Whose National Theatre Is It? Oliver Frljić in Conversation with Marta Keil and Agata Adamiecka-Sitek

How to Lift the Curse? Director Oliver Frljić and the Poles

THE SYSTEM: WHAT WE’VE GOT, WHAT WE NEED, WHAT WE CANNOT LOSE

What Is the Purpose of Institutional Critique Today?

Institution: the Defence of Necessity

On the Common Good: The Institution of the Chorus and Images of a Nation in Marta Górnicka’s Theatre

Can Centrala Save Us?

The ‘Open Activity Academy’, or: On Akademia Ruchu Centres

The Actor in the Deadlock of Contemporary Folwark Relations

Dismantling Our Own Language: Justyna Lipko-Konieczna and Justyna Sobczyk in Conversation with Zofia Smolarska

Censorship as the Formative Mechanism of Neoliberal Culture?: The Productive Function of Prohibition

THE INSTITUTION OF A FESTIVAL

The Institutional Practices of a Festival

BATTLES FOR INSTITUTIONS – WARS FOR CULTURE

And the Winner Is…Appointing Artistic Directors in Hungary

Who Wants a Theatre Company and Doesn’t Have One?

We, The New Public Theatre

On the ‘People’s Theatre’: a Glance Back