"Women’s voice" (collaboration between Dramalabbet and Royal District Theatre) is bilateral exchange between women playwrights from Sweden and Georgia. The aim is to draw attention to women playwrights in developing countries. Another goal is exploring identity and nationality from a women’s point of view, to exchange experiences in each country and learn from each other.

The project consisted of two workshops, one in Stockholm and the other in Tbilisi. Before the first workshop the participants wrote a monologue, the Georgian playwrights wrote from the perspective of a Swedish woman and vice versa. The idea was dare to take note of a foreign identity, and explore its fantasies and prejudices.

In addition to discussions on these texts, there were also practical exercises: „guided tours” of museums, churches and other places of cultural importance – all these tours had their foundation in a feminine perspective and were designed to gather inspiration and knowledge concerning the position of women in two respective societies. The main focus was daily text discussions, which began with reading of the pre-prepared texts – variety of issues were discussed afterwards, including xenophobia, gay questions, religion and others. At the end of the workshops there was a public presentation, a reading, of "Women’s voices" took place at the Royal District Theatre (RDT) in Tbilisi.

"Women's Voice" is a continuing journey in learning, group process and democratic thought, one of the building blocks of international networking. Another one is curiosity and openness towards the unknown. The participating playwrights are not only from different cultures; they have unique experiences, different education and are born during different times.

A continuing dialogue strengthens and develops the creative processes. The goal of "Women's Voice" is to protect the qualities that are required for communication and group work. It is a project infused with openness in which all participants are part of the planning and decision making process.

Moreover, a further goal is to write texts that are so interesting and of such high quality that they will lead to stage productions in Sweden and Georgia. The texts are tools to put light on, spread and share knowledge of woman's roles in the two societies. "Women's voice" is a pioneer project that hopes to inspire other organizations to see possibilities in international collaboration. A key to the future success of the project is expanding and developing a network connecting Swedish and Georgian playwrights. It is our hope that "Women's Voice" will strengthen the position of new woman's dramatic writing in both countries from two individual points of view. 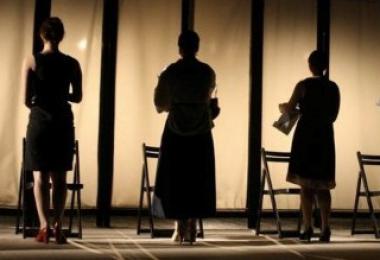