A number of key questions arise in the history of dance in Central and Eastern Europe in the 20th century. Did the countries situated between Russia (in its Soviet and later period) and the states of Western Europe—two strong polar opposites, both politically and culturally—manage to achieve autonomy in their artistic output after the First World War, especially when it comes to young arts, such as contemporary dance? How did dance influence the formation of national identities in the changing political realities? How did the process of overlapping between the categories of tradition and the avant-garde take place in these countries, and what where the relationships between artistic experiments and folk and national dance? How were the various “politics of dance” created? How were the different dance traditions institutionalized, how were they codified, engaged into ideological projects and what were their attempts at emancipation? How did national histories and the history of dance in Europe and the world complement each other? And finally: how would it be possible to introduce micro-histories and biographic elements into grand historic narrations?

The aim of the conference is to supplement the traditional, vertical historical narration (describing influences and hierarchies) with a horizontal perspective: encompassing local diversities, relations between regions, personal memories. Presented in this manner, the history of contemporary dance in Central and Eastern Europe extends beyond descriptions of imitation or adaptations of models devised in the centres, and demands attention for the  individual nature of regions. At the same time, biographies of dance artists, including the most prominent creators in the field, cannot be captured in the narrow framework of national histories—because of frequent migrations, changes in citizenship, games with identity and affiliation, translations of techniques.

The programme of the conference is based on three themes: the role of women in the development of contemporary dance; the regional and trans-regional perspective on the description of European dance history in the 20th century; and the relationship between contemporary dance and folk and national dance. The conference will begin with a presentation of several extraordinary women dance artists: Pola Nireńska, Bronisława Niżyńska, Marie Rambert, Yanka Rudzka. These artistic personalities were shaped by Central-Eastern Europe and had a substantial impact on the development of contemporary dance throughout the world: in Great Britain, the United States, Canada and Brazil.

The conference will inaugurate the project CHOREOGRAPHIC TERRITORIES – NEW PATHS FOR THE AVANT-GARDE. It will open a discussion on the trans-regional history of contemporary dance, while simultanously displaying the role of women in the development of 20th-century choreography in Central and Eastern European countries. The proceedings will be gathered in a bilingual post-conference publication.

Concept and coordination of the programme’s theoretical aspect:

The event is organized by the Adam Mickiewicz Institute operating under the Culture.pl brand, in cooperation with the Lublin Dance Theatre – the Centre for Culture in Lublin, the East European Performing Arts Platform (EEPAP) and the Theatre Arts Unit at the MCSU in Lublin; within the international cultural programme accompanying Poland’s centenary of regaining independence – POLSKA 100 (Priority 3a of the Multi-annual Programme “Niepodległa” 2017-2021).

(You can download the conference programme in English, Polish and Russian below)

Opening of the conference by the organizers:

Jadwiga Majewska, originator and coordinator of the conference, the Jagiellonian University

Karen Mozingo (Department of Theater, The Ohio State University) –  Choreographing Absence: Ausdruckstanz, Exile, and the Holocaust in the Work of Pola Nirenska

Tribute to the scholar Roman Arndt

Stephanie Jordan (University of Roehampton, London) – Dialogues between Music and Dance: from Polish Landmarks to the Present

Alexandr Chepalov (Kharkiv State Academy of Culture, “Dance in Ukraine and in the World” magazine) – Rudolf Laban's reconstruction of dance in Ascona 2017

Jadwiga Majewska (Jagiellonian University, Cracow) – Policy Towards Dance and the Politics of Dance in Poland in the Interwar Period and after the Second World War

Svetlana Ulanovskaya (Belarusian State University of Culture and Arts, Minsk) –  Is there a History of Belarusian Contemporary Dance? An Attempt at Periodization

Open discussion: Artistic migrations in contemporary dance – with the speakers and participants of the conference

Financed by the Ministry of Culture and National Heritage of the Republic of Poland as part of the Multi-annual Programme “Niepodległa” 2017-2021.

The conference is organized under the honorary patronage of the Chancellor of the Maria Curie-Skłodowska University in Lublin.

CHOREOGRAPHIC TERRITORIES – NEW PATHS FOR THE AVANT-GARDE is a multiannual project presenting Polish contemporary dance by some of the best Polish artists, educators and theorists of dance affiliated with the Polish Dance Platform 2017. It is planned for the years 2017-2021 and includes performances, workshops, meetings and debates organized in the most active centres of contemporary dance in Central and Eastern Europe: in Belarus, Ukraine, Georgia, Armenia, Slovakia, the Czech Republic, Hungary, Slovenia, Serbia, Bulgaria, and more. The project is a continuation of the 2016 Choreographic Territories programme, the idea of which has been expanded to encompass propositions connected to the prominent figures of women artists of the 20th-century dance avant-garde who were of Polish descent: Pola Nireńska, Bronisława Niżyńska, Marie Rambert and Yanka Rudzka. Their artistic work and fascinating biographies constitute a starting point for constructing the project’s programme, based on a model of intercultural exchange and focused on real cooperation between local communities, presenting themes which emphasize the strong presence of women choreographers and dancers—both today and in the history of Polish dance in general. The idea of the project is to demonstrate that just like in the twenties and thirties, Polish artists can still be a source of inspiration and modern understanding of choreography.

The project is coordinated by the Adam Mickiewicz Institute operating under the Culture.pl brand, in cooperation with the Lublin Dance Theatre – the Centre for Culture in Lublin, the East European Performing Arts Platform (EEPAP), the Institute of Music and Dance and the Art Stations Foundation; within the international cultural programme accompanying Poland’s centenary of regaining independence – POLSKA 100.

Financed by the Ministry of Culture and National Heritage of the Republic of Poland as part of the Multi-annual Programme “NIEPODLEGŁA” 2017-2021. 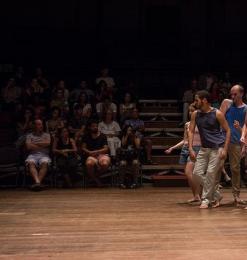