EEPAP Performative Centre: "What if that was your very last festival edition?" A seminar during the Konfrontacje Festival, 11-15 Oct 2017 (Lublin, Poland)

WHAT IF THAT WAS YOUR VERY LAST FESTIVAL EDITION?

A seminar addressed to young performing arts curators, thinkers, researchers and practitioners, based in Central and Eastern Europe. See the open call here.

Edit: We have closed the application process and selected 15 participants for the seminar:

Festivals are definitely one of the most influential art institutions in the contemporary performing arts field. They showcase the works of artists, but frequently produce and promote them as well; they act as an intermediary between the artist and the audience; they co-create and actively shape critical discourse accompanying artistic praxis (catalogues, translations, publishing series, thematic books, etc.), thus actively informing the ways of thinking about theatre and dance, and participating in setting out the directions in which these develop. An examination of the current international circulation of performing arts will show that it is primarily shaped by festivals. What is the impact of the understanding of the festival as situating it in the space of public institutions of art? What task and what responsibility (to artists as well as to audiences) does the festival have; what role does it play in forming the exchange of thoughts and experiences and in shaping new artistic proposals?

At the same time, in the festival context, artists’ working conditions have become precarious; artistic practice, stretched between one project and the next, lacks continuity, focusing instead on the result and the end product. Moreover, festivals proved to be a perfect instrument of promoting the so-called creative class: international contacts and (geographically and financially) wide-ranging arts projects have become very fashionable indeed. If we look at the festival from that point of view, we will see that not only is it, to a large extent, the product of the neoliberal system, but it also reinforces and consolidates the neoliberal order. An urgent question presents itself here: how  can festivals meet the basic criteria of a public art institution if at the same time they are so strongly embroiled in neoliberal mechanisms? And another one: given these circumstances, is it possible to think of a festival as a critical, emancipatory space? If so, how can that potential be unlocked?

We would like to propose that young performing arts curators, thinkers, researchers and practitioners reflect on the contemporary position, role and responsibility of a festival, to workshop together the possible (and impossible!) ideas on how to hijack it, how to regain it as a common space. Let us try to think of the impossible as possible; to embrace the impossible and to find a space for it. What if none of the conditions and ways of working that we know is left? What if the festival was another attempt to embrace the public space? What if, instead of presenting works to more or less professional audiences, we contradict the festival mode and use its tools to create a space which is not production-driven, but focused only on the present time? What if the art institution turns out to be a common space, inclusive of the groups in society that have always been excluded? What if we are delayed? What if that was the last edition of your festival — how would you think on its program then? Let us imagine the impossible, let us make a room forit– the circumstances and contexts we have known until now are shrinking anyway and there definitely is a space (and need!) for the unthinkable.

The seminar will be held in English.

EEPAP covers the travel and accommodation costs of the participants and offers tickets for the  Konfrontacje festival (www.konfrontacje.pl). The participants will be asked to write short essays after the seminar.

Gundega Laiviņa runs the New Theatre Institute of Latvia, a project-based organization working in the field of contemporary performing arts. Since 2009 she has been the artistic and managing director of Homo Novus, the International Festival of Contemporary Theatre. Gundega has studied music, theory of culture and social anthropology. In 2011 and 2015 she was a curator of the Latvian National exposition at the Prague Quadrennial of Performance Design and Space (exposition The Submission was awarded with the golden medal for the total performance design in 2015); from 2010 till 2014 she was a member of the artistic board of Riga – the European Cultural Capital 2014 and was specifically responsible for site-specific initiatives and projects involving communities.

Daniel Blanga Gubbay is a Brussels-based researcher and curator of public programs. He graduated in Italy with Giorgio Agamben at the Architecture University of Venice, and got a PhD in Cultural Studies and a postdoc in Düsseldorf on the transformation of the concept of the possible in Modernity. He teaches Political Philosophy of the Arts, and currently holds the position of the head of the performance and choreography department at the Royal Academy of Fine Arts in Brussels. He works as a dramaturge for the Kunstenfestivaldesarts. He is part of the curatorial board for LiveWorks and is the initiator and curator of Aleppo, a research platform engaged in public programs in performance and political theory, appearing as open and free Imaginary Schools.

EEPAP Performative Centre is conceived as a research and artistic practice laboratory which creates and elaborates the discourse around contemporary performing arts practices. The Centre’s mission is to create a space which enables an open, animated dialogue, not subordinated to the market principles and free from hierarchical academic structures. The program will consist of research and residency projects, seminars, discussions and workshops, always combining theory and practice in the field of contemporary performing arts.

The Centre’s main goal is to offer artists, thinkers and culture workers a time and space to think and practice instead of forcing them to produce new events. The Centre offers a space which is focused on developing choreographic and performing arts practices and strengthening critical reflections around them in the social, political and economic context.

EEPAP Performative Centre is a new initiative by EEPAP (www.eepap.culture.pl) and the Centre for Culture in Lublin, Poland (http://ck.lublin.pl/en/) and is curated by Marta Keil. 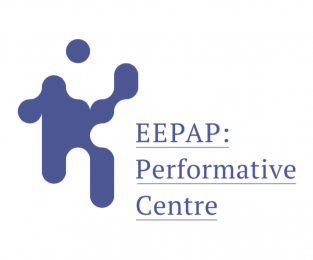