"My grandpa was digging. My dad was digging. But I won’t do it": Premiere of EEPAP-supported perfomance at Gogolfest

“5 actors from different regions of Ukraine and Poland are doing research on the common and personal past and memories of their countries though their individual experience. Is there a direct way from individual experience and memories to the collective memory? Why do collective memories sometimes suppress individual ones? Who tells us what to remember, and what to forget? And do the things that are left out of the museums and aren’t in the school books still make a history?”

This performance is a result of the project “Maps of fear/Maps of identity” that started in February 2016. Nearly 40 artists from different regions of Ukraine (Zaporizhia, Lviv, Kherson, Kharkiv, Kyiv, Khmelnytskyi, Poltava, Odesa) worked together with Polish trainers creating workshops and labs.

After the workshops, there surfaced a team of Ukrainian and Polish artists who created the mobile co-product “My grandpa was digging. My dad was digging. But I won’t do it”. The team includes: screenwriter Dmytro Levytskiy, painter Alevtina Kakhidze, performers Lukasz Wójcicki and Oksana Cherkashyna. The manager of the project is Joanna Wichowska, and the directors – Agnieszka Blonska and Roza Sarkisian.

“It’s important for us to expose not only the social-political mechanisms, but also theatrical ones. Especially since in the theatre the past and memory are expressed though fiction, which always wants to be taken as a reality. Can the stage – the space of soupy characters and events, illusions, which we want to believe in – become the place where we want to explore the memory mechanisms and our complicated relations with the past?”

The project is implemented by Stowarzyszenie Praktyków Kultury (The Culture Practitioners Association/ Warsaw) together with Ukrainian organizations from Lviv, Kyiv, Kharkiv, Odesa and Kherson.

Co-financed by the Ministry of Culture and National Heritage of the Republic of Poland.
Supported by East European Performing Arts Platform (EEPAP). 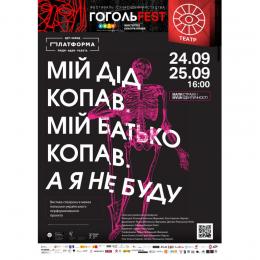