Since then every year he visited many major educational dance projects all over Europe.

In 2003, he graduated from the Kiev State University of Culture and Arts (Stage Director & Choreographer).

In 2005, he founded the dance company Black O!Range Dance Theatre. The theatre takes part in all the major dance festivals in Ukraine, as well as major festivals in Russia and Belarus.

In 2009 he graduated from the Kiev National University of Culture and Arts with an MA degree in contemporary dance.

Since 2009 he has been teaching contemporary dance and dance composition at the Kiev State University of Culture and Arts.

In 2010 he established the Zelyonka Fest Contemporary Dance Festival in Kiev. Since then he has been the artistic director of the festival.

From 2015 – the head of NGO UA “Contemporary Dance Platform”.

President of the Association

Organizer of the project

The Curator of the Ukrainian Booth

Founder and artistic director of the Festival 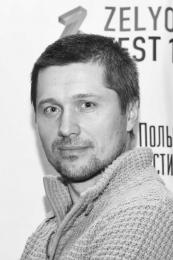