Olga graduated from the Belarusian State Academy of Arts(Theatre Department), simultaneously taking classical ballet classes under the direction of Ivanov V.V. (a national artist of the Republic of Belarus). While  still a student at the Academy, Olga staged her first works: "Yablyn" ("Apple-tree") and "The story of one suitcase". The works were laureates of the contemporary dance festival IFMC in 2002 –, held annually in Vitebsk.

In 2005, together with Dmitriy Zalesskiy, Olga became the cofounder of the contemporary dance theatre D.O.Z.SK.I. They have created performances such as "Flies on the sun", "Stone. Scissors. Paper", "Homo sapiens", "Winter", "Summertime". As an independent choreographer, Olga staged the piece called "V Doline Doli".

She has participated in various festivals as a dancer and choreographer, including IFMC (Vitebsk), TSEKH (Moscow), Zavirovanne (Warsaw), Golden Mask (Moscow), Tanzmesse (Dusseldorf), Theatre Forum "Mart-contact". As a dancer and member of the Theatre of Modern Choreography D.o.z.sk.i ... , she was invited to Warsaw’s Opera and Ballet Theatre on a concert tour.

Being also an actress, Olga has performed at the physical theatre "Korniag THEATRE" in the following pieces: "Piece №7" and "Café absorption" (which she herself choreographed)

She has participated in a number of international theatre and dance projects including the Minsk-Berlin project "Carefully. Fragile", choreographed by Olga Kostel, and the Bialystok-Berlin-Minsk project "Beauty of life" choreographed by Carolina Garbateck. Together with Dmitriy Zalesskiy, she  choreographed the theatre project "Voitek", based on Georg Büchner‘s play under the same title,  directed by M. Dobrovlyanska.

In 2012, Olga founded her own dancing team "Skvo’s Dance Company". 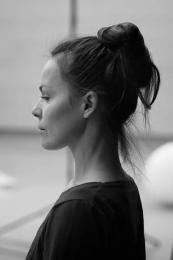