Viktor Sobiianskyi – theatre critic, lecturer and curator based in Kyiv, Ukraine. Graduated from Karpenko-Kary Kyiv National University of Theater, Cinema and Television in 2008 with a master’s degree in drama science. He has worked as a correspondent for several Ukrainian  magazines, cooperated with “1+1 Channel”, the “Antiquary” magazine, and served as a press-attaché at several festivals and artistic events. His articles were published in Ukranian, Russian and Belarusian scientific journals.

He used to work at the Les Kurbas National Centre for Performing Arts, where he organized scientific conferences and was an editor of “Kurbas’ reading” scientific magazine, and “We are “bereziltsi” (actors of “Berezil” Theatre)”.

He took part in Academy of Culture Diplomacy (Warsaw, 2013), worked as an expert / jury member of Kyiv Pektoral Theatre Award. He produced and curated many international project, including: “The Lectures about Theatre: Poland. Culture. Ukraine” publishing project (2010), The Workshops of Polish Choreographs, Directors and Playwrights for Young Ukrainian Artists (2011), International Summer School for Theatre Curators (organized together with EEPAP in 2012), The Les Kurbas Festival of Young Ukrainian Directors (2012 - 2015), British Council educational project “Behind the Scenes” (2013-2014), British Council’s Theatre Programme 2015.

Viktor is a member of the Theatre Union of Ukraine. Currently he works as a lecturer at the Theatre Department of the Karpenko-Kary Kiev National University and literary director of the “Zoloti Vorota” theatre in Kiev. He is a co-founder and a Deputy Chairman of the Board of the independent organization “Theatre Platform” (“Театральна платформа”).

He has cooperated with EEPAP since its beginning, taking part in EEPAP meetings, and co-organizing EEPAP project in Ukraine, including The Summer School for Theatre Curators and all the sessions of Theatre Laboratory undertaken in the frame of EEPAP educational project DESANT. He initiated and co-curated (together with Joanna Wichowska /EEPAP) the 1st session of Theatre Laboratory in Pluty  “Director-Playwright-Dramaturge: Creating the Message” (August 2014). 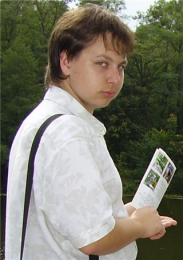